We’ve been reading the popular math curriculum Life of Fred by Dr. Stanley Schmidt with my now 6-year-old and we love it. My son asks to read it routinely and, if it weren’t for time constraints, we’d probably do an entire book per day. 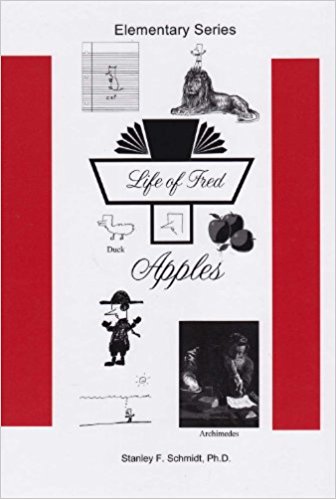 This math program is told in story format. Fred is a 5-year-old math professor who is 3 feet tall. He has seeming no sense of fear and gets himself into predicaments often.

What I love about it is that I really believe that Fred is a math professor. When I think of a math professor, I think of someone who (1) plays with numbers and (2) gets lost in his thoughts thinking about numbers. The first thing Fred does is go out for a run and ponders and defines the world in terms of numbers. How many of this tree are there or that one? How many sailboats on the left or right side of the lake? This is exactly what math is and should be: a means to understand the world. I think of math as kind of a blanket that sits on top of all of the world. Not literally but figuratively. If you look at a shoreline and you think, “That is a never ending fractal,” you are thinking like a mathematician and may understand what I mean.

I would describe Dr. Schmidt as Mo Willems meets Denise Gaskins. Willems is a cartoon author who is wildly popular, famous for Elephant and Piggie books. Both Mo Willems and Schmidt have discovered that it’s hilarious to children when small animals (birds or butterflies) land on your hand. Similarly, it is hilarious to children when you play “catch” with living things (just trust me.)

Denise Gaskins writes about teaching children math using a playful approach that focuses more on open-ended problems that children have to think creatively about rather than plug and chug problems. Gaskins has written several books one of which is Let’s Play Math.  I wholly recommend her books. Schmidt uses some of what she recommends. For instance, if there are 9 mice and 2 are eaten, how many are left? Indeed: math is all around us! In Life of Fred, there are also open ended riddles, the kind that Gaskins recommend, that help the child think more creatively. For instance, if tomorrow is Friday, what day is yesterday? I use many of the games and recommendations that Gaskins uses–and they are great especially when doing math in the car. (I once asked my son while in the car if we had 6 doughnuts and we have a family of 5, how many doughnuts does each person get? He said he gets two and everyone else gets 1. Ha.) I rounded out our math with Life of Fred because it helps me make sure I’m not missing anything. Also, I find my 5-year-old boy absolutely loves the feeling of accomplishment after we finish a book. He wants to do “ALL OF THEM!!!!”

I don’t know how much Schmidt has studied child psychology or worked with children (he is a math professor so he has ample experience teaching), but he sure knows how to teach a child. He uses similar strategies that I use by comparing and contrasting things to teach. I call this the “Three Little Bears” approach, where you teach “cold, warm, and hot” to teach these ideas, not any in isolation, and if I remember right, he uses this exact reference. (I need to look this up.) As one example, when there is an interesting but possibly scary insect, one character runs and hides (Kingie), Fred puts his nose right in it, and their friend cautiously approaches the insect. Schmidt points out that one reaction was too scared, one was too trusting, and the other was just right. I enjoyed also the occasional history review, such as why the “Pacific Ocean” is named as it is. We had read about this in our history stories but it’s fun to see it reviewed again–other people know that too!?

Some people say math is “hidden” in this book; that the story format makes it fun while math is “snuck” in. I don’t agree at all. Math is center stage and math is fun not hidden. There is occasionally things my son wants to skip over, but that is a product of where his mind and mood is that day. More often, my son’s mind is clearly awakened to an idea after we read about it in Life of Fred. The day he learned that numbers could go on forever and that after a million is a BILLION and after a billion is a TRILLION and so on, I had, on my hands, a little boy who was completely mesmerized by big numbers. While lost in his thoughts, he would ask me, “What would it be if there was a 1 and a TRILLION ZEROES?” Honestly, I have no idea. I am happy to be the person in his life who he can stump as he thinks of wildly impossible but possible things!

To round all of this out, perhaps the highest compliment I can give Schmidt is that he seems to genuinely love children. We hear about Silly Duck who says complete nonsense and tells lies. “Silly Duck does not equal the truth.” Fred is encouraged to stay away from Silly Duck. I really got the impression reading it of, “We think Silly Duck is Silly and we can laugh with him a bit but he doesn’t tell the truth and we want you over here safe with people who do tell the truth.” This author loves children.

Life of Fred goes all the way up to the higher maths. In looking through lifeoffredmath.com, there are

I had to slow my son down and negotiate with him that we would do four chapters per day. I would do more, but I have two other children who need me. I never have to beg or plead with him to do it, whatever he is doing he stops and comes to listen to the story! I wonder if four chapters per day is actually too fast as it may be better to savor the lesson in each chapter. However, as it is a story, it’s also nice to click along from one chapter to the next with few interruptions. I am amazed by how many lessons we do in story format–even technology is sometimes best done in story format as you listen to books such as The Story of Flight.

Come join me at Facebook as “The Observant Mom” and see my book “Misbehavior is Growth: An Observant Parent’s Guide to the Toddler Years” about the developmental cycles that children go through and how to use them to survive then thrive.