This is a story from when my son was 5 and he was very aggressive in public. I was too embarrassed about it at the time to share it. But now that we are an entire year after it happened, I feel confident sharing it. I want to share it because it shows how the storm inside a child is actually a cry for teaching and guidance. If you know what they are hungry to learn, a terrible incident can turn into a great learning opportunity. You might also see that you are not alone in dealing with an aggressive 4 or 5 year old, even if you are the most gentle, supportive parent. From my journals when my son was just 5 over years from the due date:

It’s been a hell of a time lately with John being aggressive. He frequently taunts Emily by taking something she wants and then trying to get her to chase him over it. At baseball tonight, he took a ball out of a kid’s hands to throw it. The coach yelled at him. Then at the playground afterwards he tried to get Emily to go down the slide by pushing her. After she got upset, he stomped on her hand with his foot.

I was really fuming mad that he stomped Emily. The thought crossed my mind, while at the playground immediately after, to pick him up and swat him across the butt. Can you believe that? The Observant Mom, who advocates patience at all times, thought about unapologetically swatting her 5 year old son in a very public spot. I wouldn’t have even done this out of anger. It was a very conscious, “He is being a jerk and needs a swat.”

I managed to collect myself. I yelled at him and told him how disappointed I was (carefully saying I was disappointed that “it happened” not “in him”). Then I comforted Emily. I haven’t had to respond to aggression like THIS in a while. This is a muscle that hasn’t been used in some time. As a mom, I find I have to match my kids’ behaviors. If they are mildly upset, I respond with mild soothing. If they are majorly upset, I have to match them with major soothing. If they hit, I have to match it with swift kind but firm actions. I was proud to realize I could still match this decently well. I did yell, but it was a controlled yell, and at no time did I lose it. (By the way I have some shin splints so I was limping to get over to John. It was all pretty terrible, really.)

As I was leaving I was thinking, “Wow, I advocate positive parenting and I have a sincere problem (lately) with getting my child to not be aggressive. What if all of the authoritarians are right? What if I am too permissive? Other parents are all over their kids about behaviors and maybe they do something that I don’t to repress this ill behavior.”

I had the thought, “Maybe he needs some consequences. Maybe some privileges get taken away.”

Later this night I got to thinking about the situation. I do not fundamentally believe that punishment will help the behavior. Any time I have ever used it, which is usually in moments of frustration, I have never seen improvement. Yelling especially just doesn’t work.

I wondered: What is going on in his head? How does he see the situation? Are there emotions trapped in him that need to come out? How can I get to his side of what is going on?

The last time we had a family meeting, so many emotions came pouring out of my son. It was shocking to see how angry and upset he got at things as we brought up some of the things that had been happening. He was dealing with SO much (at the time we had recently moved). I wanted to try a family meeting to see if this same emotional flood would happen.

I could feel however that a family meeting on THIS night would feel like a sermon or worse. It would feel like we were putting my son on the hot seat to grill him about his behavior; then pressure him to change. I don’t want him to feel like that. I thought about how I could make it comforting. I had remembered in a Positive Discipline book to start the meeting off with compliments about each other. It sets a better tone. I did that and I offered my son juice and asked him to get comfortable and I tried to say “We want your side of that issue,” and I attempted to say it with sincerity.

We did have the meeting tonight. No emotional flooding happened. However, the first thing he said, even before the formal meeting was, “Five year olds don’t know good from bad.” We talked about that for a while. I still don’t know if he meant he doesn’t know or that others don’t know, and he needs to be the enforcer of good and bad, because that is how he behaves sometimes. I did get it out of him that he is trying to get Emily to play a game with him every time he pushes her around.

I really tried to connect emotionally, which didn’t go terribly far, but in hearing his responses, I thought he needed to hold on to a specific word (mentally) in order to know how to behave better. And, a word that describes what to do, not what not to do. Previously I had been telling him, “Stop taunting your sister.” I decided the lesson to give, about what TO do, was on “Consent.” I gave an impromptu lesson on it.

So, I modeled asking his dad for a pen, where first I got consent and then I didn’t. I responded respectfully and ideally. Then I briefly modeled not having consent but taking the pen anyway. I still believe in teaching opposites in order to demonstrate a point. I said taking the pen without consent was “stealing.” In the middle of this lesson, John actually asked me to take his paper airplane. My astute husband asked “are you giving mommy consent to have your airplane?” I did some consent/not having consent lessons with the airplane.

Then, knowing his underlying motive is to have fun with his sister, which he has said repeatedly over the past several days, I modeled asking her to go on the slide with him. When “she” (part played by dad again) said no, I responded by saying ok, but then I modeled myself as being my son who “really really wants to play with [his] sister!!” and so I thought, “what can I do that she likes that is fun?” I asked his sister what she was doing. She was pretending to be in a castle as a princess. I asked if I could be a knight. There we go. That is mutually fun.

I am hoping this is a cognitive leap. As he is the first and little is documented, I don’t totally know what it is. It is clear he is dealing with issues of right and wrong. I would like to be in a community that has a set of rules to follow, such as Boy Scouts. This is part of my next steps in this.

The only thing that has “worked” lately is distraction. I get the kids doing a new activity when a fight breaks out. My new approach from now on is going to be, “What can you do that is fun that you think Emily might also think is fun.” Of course, we won’t do it unless Emily agrees (unfortunately Emily typically wants to chase, then doesn’t, then does, then doesn’t … ).
Fundamentally, as I have found over and over again, satisfying the underlying need is so much better than trying to control behavior. It teaches a positive lesson about life instead of banishing one behavior. Banishing the behavior carries the risk of suppressing that behavior in other times when said behavior is ideal. I am not, for instance, entirely on board with telling him that hitting is wrong, because hitting is NOT wrong in certain situations. I don’t want him to be submissive; I want him to be wise.

One final note. I knew that John fights with other kids over who gets the ball at baseball. I previously talked to the coach about it, prepared to work with him about it, but the coach said it’s normally hard to get the children to go after the ball, so if they are fighting, it’s actually more than he can ask for. Well, John definitely goes after the ball. John lives to get the ball. I am a little proud that my parenting philosophy allows for enormous initiative of action and has naturally built such concentration that my son, at a young age, can concentrate at all times on where the ball is and goes to get it when the opportunity arises. I also will say that I did watch him show restraint when the ball was not in his designated area. It was but once that he had a lapse of judgment and took it from another boy. Navigating these difficult issues at such a young age is difficult but sure to be of benefit when he becomes an adult, when the other children are now also, finally, trying to get the ball.

And it should be noted that centuries of authoritarianism (controlling the behavior) has not produced adults who truly understand what “consent” is.

Come join me at “The Observant Mom” on Facebook. See my work about child development here, documenting the stages they go through. (FREE Printouts are available.) And see my book on toddler, “Misbehavior is Growth: An Observant Parent’s Guide to the Toddler Years.”

This is a chart with the Early Elementary Milestone so far: 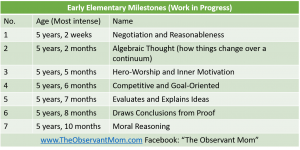