Skip to content
Posted on June 16, 2018 by Amber Posted in Uncategorized

Before I became a stay-at-home mom, I worked as a test engineer. One thing I learned is that the test itself could alter the outcome. You need to observe without interfering. In thinking about any educational approach tried in any school, what if the heavy evaluative testing, meant to “hold people accountable,” will cause any approach whatsoever to fail? Let me give an example, also from when I worked.

At work, several years ago, I started to develop a training program for people. I wanted to have videos that people could watch to get them up to speed. I thought it was brilliant. There was a fierce attitude amongst coworkers such that they would not share their knowledge. This led to a much longer than necessary time for new hires to understand the work. (This I-have-the-kickball-and-you-don’t attitude leads to no growth which leads to job loss.) If I could just get each expert to make 1/2 hour video about their topic, any person could be spun up, and no future effort to train people would be needed. This training program failed and the only video produced is one I did. I think this is why:

The Six Sigma people came in and said there had to be metrics, accountability, and hierarchy. We were told from a “black belt’ to go find Bloom’s taxonomy.  We had to sit around and ponder this hierarchy ad nauseum. This mostly caused fights among people, who all remembered and hated their own education and wanted to try things differently. 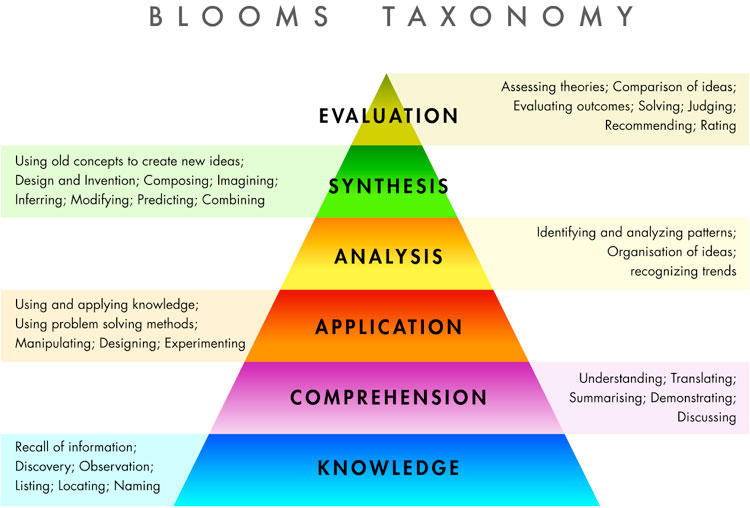 We also had to have levels. So a person who passed X number of tests was a Level 1, then 2, up to 4. And the experts built in on-site experience into the hierarchy too. I love on-site experience for learning, however, it turned into a means to manipulate people. Management saw it as a way to strong arm people into doing undesirable work: people would have to work difficult, boring events, possibly on third shift to get their accreditation. Six Sigma people even wanted this accreditation tied to people’s evaluations, which would be tied to their pay. People revolted! They didn’t want to be judged or evaluated and have pay hanging over the pass or fail status of this program. Those enacting the program also wanted to build safeguards in to make sure people weren’t cheating. I admit that I, not knowing any better, fell in line with the “people need assessed” mindset, which was drilled into us at every single meeting with every single “expert.” In short, it turned into a highly evaluative program that people saw as snuffing out people as good versus bad, strong arming them into things they didn’t want to do, and also new recruits saw as a boring thing to do–unrelated to any of what they would be expected to do at work. It went nowhere. It failed.

Literally 5 years after I made and had quit, I got asked where the video I did make went. And this is exactly as it should have been used. Someone NEEDED it. Someone WANTED it. I had expert knowledge on it and I recorded it. This is how it should have been all along: As a repository of information for people to use when and as they needed it. No metrics, no hierarchies, no evaluations, no worry about if they are “cheating.” I believe the metrics and Six Sigma-ing and testing inserted into it by the authorities, the “black belts” ruined it. I’m for metrics and insight but they need to be invisible. People cannot feel like they are being judged and evaluated. They need to feel like they are being supported and empowered–by the way the supposed goals of Six Sigma.

I was in a very “corporate” atmosphere. By “corporate” I do not mean “free market” or “high quality business” atmosphere. Please don’t confuse the two. It had layer after layer of bureaucracy and management and accountability and waste and slack and, I hope you get it. This is the same exact atmosphere a traditional school is now seeped in. Traditional school is heavily influenced by various outside sources, of which I think are the same sort that I just described. Education MUST be decentralized.

I want to make it clear that I am not opposed to “testing.” Testing can be healthy. I use it for two purposes 1) To assess if the lesson was received well by the child and 2) To give the child healthy practice at using the information. It is NOT evaluative. It doesn’t need to be formal either. If they keep a journal, I can assess their knowledge. If they fail a test or write something down that is wrong, I don’t mark it with a big fat “F” or even overtly tell them it’s wrong, I know I need a new approach. Nothing is a test of the child–certainly not a moral test or tied to their pay or well being. This is my main problem with how education is done. Education is highly evaluative and demands performance–in short, narcissistic. Education, of all things, should be nurturing and empathetic.

I believe any good idea is bound to fail in this evaluative test environment. Let’s take the idea of project-based learning. I’m for it! Instead of learning subjects, you do projects, and in doing so, you learn the subjects. The only difference is approach: the project helps the student understand why they are learning something. To learn to read a map, you go camping. And you know what is the best outcome of that first camping outing? For the children to fail! To go out and realize they were ill-prepared. And then go back and have a burning desire to learn the information so they can do it well the next time. In the evaluative approach, they would be judged, corrected, told they failed, and it would go towards their final grade at the end. Project based learning would not stand a chance in a current typical American school. And after it “failed,” traditionalists would be there saying “Mmmhmmm. Told you it would fail. Stick to what works.”

I wish I could go back and advocate what I am saying here for that training program I made. The supposed purpose of Six Sigma is to improve design, to NOT place blame at individual people’s feet, but instead empower them and set them up for likely success. I think the ideas I present here would be well received. I am not opposed to metrics. Metrics are good but they need to be invisible and they cannot be used for the intent to manipulate or judge.

What are your thoughts?