Skip to content
Posted on August 2, 2018 by Amber Posted in Child Development

One thing that I found coincided with the most intense period of milestones is sleep battles at night. My son was especially consistent about this. While showing other intense behaviors throughout the day, at night he wouldn’t want to go to bed. He would want to either talk to me well into the night or work on a new developing skill. One time he got up and just started coloring and gluing. Another night he wanted to go for a walk to see a vacant lot and tell me how he wanted to build a house there. One night he gave me a full dissertation on whether or not his sister was good or bad. My daughter also showed this behavior but in a different way. She was more about the relationship with me. She really, really didn’t want me or her dad to leave her at night. She would physically grab us or cry. I think she also worked on new abilities but she was much more verbal about it. I would sometimes hear her talking to herself well into the night. 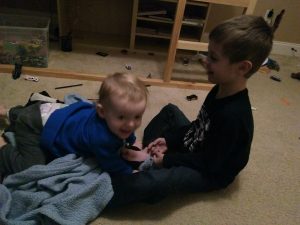 I found the majority of the time this behavior passes. It usually takes 2-4 days. I personally advocate rolling with it. Efforts to change it probably won’t go well and the behavior will resolve on it own. If they want to try out a new skill, let them. Let them amaze you in these moments. Get insight into their growing ability. Maybe do something you need or want to do while they just go about their business. I found with my daughter that our relationship was strengthened late at night. She sometimes just needed to pour her heart to me.