I did the following activity based on the documentation of childhood developmental milestones. My son went through one starting around 5 years, 2 1/2 months. Milestones are marked by odd behavior at first, followed by dramatic growth. He had but mild odd behavior at this one He but picked a few fights with his sister, but, most tellingly, wanted to stay up late at night for a few nights in a row.

What I noticed about this one was an intense fascination with relationships. He noticed once that as he backed away from a light source, his shadow changed heights. He started to predict things too. He predicted once that by the time we got home one night, it would be dark. He has an intense interest in how things change over some dimension. I called this milestone, “Algebraic Thought” because of his interest in input/output relationships and how things change over a continuum.

This activity I had here was PERFECT for his latest interests. I made a bar/line graph and taught the word “extrapolate” to my 5-year-old.

We put water into a tall glass, one cup at a time.

After each cup, I plotted it as a bar on a graph. I also put a dot at the proper intersection. After doing 1, 2, 3, and 4 cups, I drew a line from dot to dot. We then measured again, adding only 1/2 cup at a time and measured, to see if the trend of our line was right. I told him guessing the other 1/2 cup lines based on the past measurements was “extrapolation.” 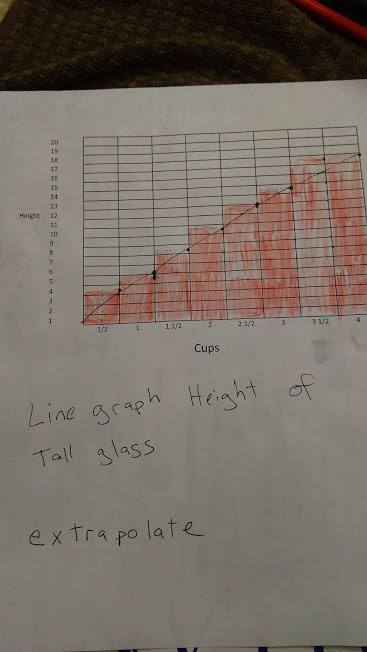 He loved this lesson. He stayed with me the whole time. He was precise in his measurements. When we started in on the 1/2 cup measurements, he said, while deep in thought “At 1 cup, it was [x] height; at 2 it was … ” and he was using his fingers to represent the height. He was mesmerized that the line graph predicted pretty accurately our 1/2 cup measurements. After we were done, he noticed how our rug made a triangle when it was folded and it got longer on one end. He was simply noticing patterns and relationships everywhere.

I offer this as an example of how you can use the knowledge of the milestones to develop educational activities. We also learned about angles at this milestone. Blog coming soon.

See my book, Misbehavior is Growth: An Observant Parent’s Guide to the Toddler Years