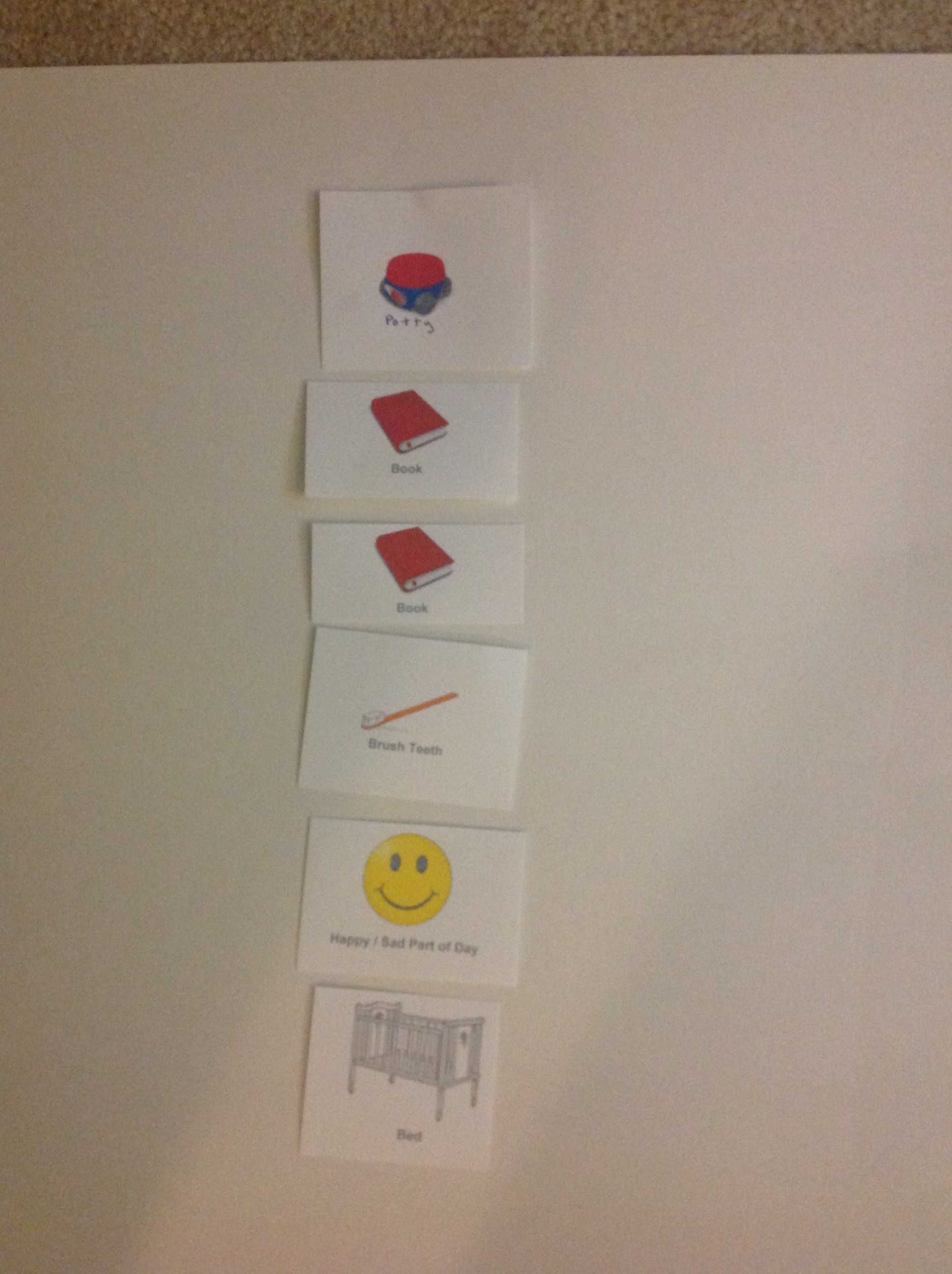 I was reading through Positive Discipline: A – Z. It suggested making a routine chart to help daily activities go more smoothly. I thought, “My son is only 2. Surely he is too young. He can’t read yet!” Then I thought, no, actually, he is about to be 3 soon, and he more than understands the meaning of pictures. I had no particular problem with bedtime, but I wanted to try it largely as an activity to learn what a “routine” is, to possibly optimize our bedtime routine, and to further impress the idea that words convey meaning. I am glad I did! It did all of these things and then some.

Since he is only 2, I wanted to keep the number of items on the routine chart to a minimum. Also, since it was his first time making one, I wanted to give a strong demonstration of how to do it. This necessarily meant that I did not ask for his input in making it, such as asking “would you like to read books before or after brushing your teeth?” I think this is a major mistake made by many parents: Asking their children questions that they cannot possibly know the answer to or how to answer. After making the routine the first time, I will ask for input, but for the first time, I asked no questions. I simply showed him the concept.

So, one night, I quickly put together the most basic chart I could come up with. I used poster board and then I printed out pictures representing what we do at bedtime on cardstock. I cut out each picture such that I could arrange them as I wanted on the chart. Also, I could then build the chart in front of him. As written by Montessori, constructing something helps children learn better than simply looking at it visually. For each picture, I made sure a word or two describing the picture was on there, in case he wanted to try reading.

I showed my son each individual picture. I then said we were going to make a routine and I started putting the pictures in order from top to bottom. Here is the super awesome chart: 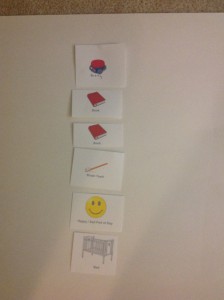 After putting it together, he immediately went to our infant daughter to explain what it was! “First we use the potty, then read 2 books …. ”

The first time we did the routine, he took the first picture off of the chart, which was “Potty,” and took it with him as he went potty. I just let him. Why not? I saw it as a way to help him learn the connection between the abstract picture and the very concrete action he was taking. As he was going potty, he took notice of the letters, spelled it out, and swiped his finger left to right over the word and said, “Potty! It says Potty!”

So, yeah, all of that was a success. We have been doing it for about a week now and it most definitely did optimize bedtime. All possible optimizations regarding bedtime are better, including:

From the time we say it’s time for the bedtime routine, I think it alerts him that bedtime is coming and he starts to prepare for sleep. He is asleep very quickly after we put him to bed. The routine helps us too. We don’t forget to do anything at bedtime or the sometimes sensitive order that the steps need to be in.

There are no longer arguments over how many books to read. Mom and dad no longer give in to the “one more book” plea. He hasn’t asked for food or milk at bedtime since doing this. Brushing his teeth is still sometimes difficult, but he happily at least goes to the bathroom now without complaint. And I am glad I added the Bed photo at the end, because he totally understands it is bedtime and he usually goes and turns the lights out himself. The routine is the boss–not us, not him.

Another tool in the tool box!