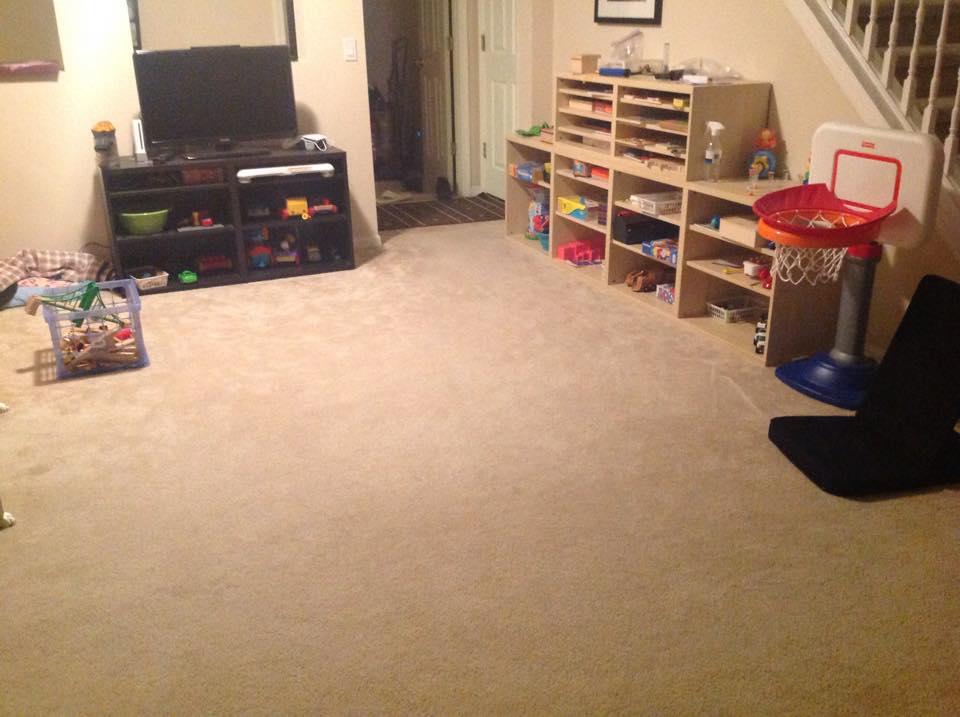 I have taken a hiatus lately from intense activities with my son, because my house was starting to blow up with toys and educational material. I decided to focus on getting my toddler to clean up. I think that life has a natural pace to it and certain markers keep you from going too fast or too slow. One such marker is clean up: If the activities are too much for my son (and me!) to clean up, maybe we are going too hard. I also noticed that if there were many activities out, my son became bored. A cluttered environment does not encourage learning.

Besides, clean up is an activity. There are many skills involved: gross motor, fine motor, sorting, arranging. I cringe when people say they would rather be doing educational or fun activities with their children than making them clean up. Or, more likely: they don’t think children can be involved in clean up so what they mean is “I’d rather be working with my children on learning than doing clean up myself.” I think this does a serious disservice to children. Intelligence is great, but is nothing without discipline.

Anyway, we have been REALLY successful at getting my son, now 2 year, 10 months old, to clean up, once every day, sometimes twice per day. I knew it would take a few weeks, and it did: it took 2 full weeks until it became a hard and happy habit. I think I threw at it nearly every single positive discipline and Montessori tactic that I know of to do it. So here is what we did along with underlying principles. Each principle is in parenthesis in all caps.

The most pivotal thing that I think I did was to recognize what was working to get my son to clean up, and then building from that. What was working was breaking up cleaning into very specific tasks. I might ask him, “Clean up your toys, please.” He would not do it. “Clean up your train tracks.” Nothing. “Please put this train track in the crate.” That resonated! (BREAKING UP TASKS INTO COMPONENT SKILLS)

Well, I found myself talking and talking AND TALKING to get him to clean up. It was one task after the other. At some point, he and I petered out. I also noticed that if we had, say, small blocks out, if there were only about 5 blocks to put away, he attacked it with vigor. If there were over 10 blocks to put away, he would do some, get distracted, come back to it after I reminded him, get distracted, etc.

So the first thing I did was to put away toys that were overwhelming for him to put away. This included large wooden blocks, a Marble run, and yarn. I also removed about half of our small wooden blocks so there were only about 10 of them in a basket. These toys are not out for him to select whenever he wants anymore, but can be used if an adult is around, i.e., they are now weekend activities. (DESIGN THE ENVIRONMENT)

The next thing that happened that WORKED was that we were going to go for a tricycle ride, and I told him, “We can’t go for a tricycle ride until we clean up.” Per the method of breaking up tasks, I said, “Could you put these books in the bin?” At first, he continued to play with a toy. A while later, I said, “Did you want to go on a tricycle ride?” To my surprise, he went over and put the books away! I wasn’t expecting that. I am not totally sure what principle is at work here. I hesitate to even recommend it because it seems like a threat: You can’t do X, until you do Y. But this did work, so I am obliged to type it out. I will only caution: If this doesn’t work, don’t persist at it. But, I will say: I was completely OK with not going on a tricycle ride if he didn’t clean up.

From then on, it became a “thing” to clean up before tricycle rides. And my husband started to do it with him before going to bed, too. So, there became certain, expected times of the day that he would clean up. (HABIT FORMATION)

Before we clean up, I usually give him a warning about 2-5 minutes in advance. “After we finish building this race car, we are going to clean up.” There have been times when he wants to leave his toy to clean up: He loves cleaning up at this point! (GIVE A WARNING)

When we would clean up, at first, I always stepped in and helped. I wanted him to see what was expected. There are also some toys that seem harder than others for him to put away, so I do the harder ones. (STRONG DEMONSTRATION) I then point to specific, small tasks and ask him to do them: put these figurines in a basket, put this stuffed animal in the drawer, etc. (START WITH THE EASIEST SKILL) All of this, let me just tell you: It worked.

When we were done, and I think this is VERY important, in fact I think this is the special sauce that made everything click: I would draw his eye to what we had just done. I would do an “inspection” of the room. It would go like this: “I really like how your tricycle is parked.” “I see figurines that are put away in the basket.” “I like how all of the mega bloks are in their bag.” “See how all of the books are in the bin.” “And look at how this area on the carpet is clear.” To emphasize how clear the carpet is, I would often run the vacuum cleaner, because he loves this. This is the Montessori principle of giving children a control of error: They need to see, for themselves, right versus wrong. A visual inspection is one such way to tell right and wrong, but for such a young child, they need extra direction to “see” it. He LOVES these inspections. When we clean up, he even says now, “I see figurines on the floor. They need to go in the basket.” (CONTROL OF ERROR)

When he is done, I give pretty strong and always very descriptive praise after he accomplishes each task. I try to praise not just that he did it but certain meta skills. These are some things I might say: “I like how you saw that the dog was out and put him away [without me even asking to.] That was good initiative!” Or “WOW! You put ALL of those mega bloks away!?” Or “I like how gentle you were when putting the pink cubes away.” (DESCRIPTIVE PRAISE)

We do this once, sometimes twice, per day. And he keeps getting better at it. I don’t have to ask him to do specific tasks as much. He does some tasks all on his own. He knows what a “clean” room looks like versus a messy one and he will work until it is clean. I will add another skill that clean up helps to develop: visual judgment. He is learning to tell, with his eye, when the task is done. He is getting better and better at putting away hard to put away toys. When he is done cleaning up, he twirls around in the play room as I describe how beautiful it is. In his mind, cleaning up is a positive and fun thing!

I may eventually insist on putting his toys away more regularly, i.e., one toy out one toy away. This is how it is done in a Montessori classroom and it certainly uses the principles just laid out and cuts clean up down to size. But, he often plays with his toys together, in creative ways, and I don’t have the heart to make him put them away, when he may be getting intellectual and creative benefit out of using the toys together. As his sister gets older and starts using the toys, I may get more strict. For now, this is working for us.

Notice that I never once threatened or punished him. I am very conscious of the kind of emotional associations I create in him. If I had threatened him, he would pick up on the association that clean up is terrible and makes him angry and upset. He loves cleaning up now. This is exactly what I want. (MINDING EMOTIONAL ASSOCIATIONS)

Now, a request from you, my reader who has stayed with me this far: The next time you see someone posting or questioning how they might get their child to clean up, could you send them this post of mine? Thank you!!

One thought on “Cutting Cleanup Down to Size”