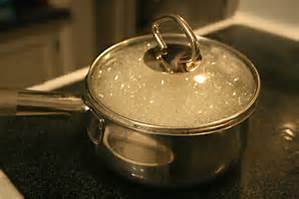 I have a problem with how “teaching hypothesis” is frequently used. A typical example is the teacher says, “We are going to do experiment [x]. Tell me your guess about what is going to happen.”

Janice VanCleave describes doing this in an article “The Industrial Age” in Practical Homeschooling magazine. After describing to boil water in a pot with a lid, she says:

Before setting up this demonstration, ask, “Do you think the lid will rise and float above the pot?” Tell the kids that when scientists experiment they call their guess about what will happen a hypothesis.”

My problem with this is how it potentially molds how a child thinks. The teacher is asking the student to make a guess about something that they may, or may not, have any experience with whatsoever. A teacher may as well put a box in front of the child and asked, “What do you think is inside this box?” This is not thinking; it’s random guessing, and it encourages a child to try to think while in a vacuum, void of experience.

Often, when I see this in practice, after the teacher asks the student a question, and the student has no idea, the teacher becomes badgering, “You need to guess! Say something!” It’s as if the child should have been born with knowledge.

I watched a YouTube video of this once. The teacher asked some students, played by puppets, about what their guess was on if objects would sink or float. When a student guessed right, the student bragged and boasted about how smart they were. When they guessed wrong, they acted sad and needed to be consoled. The emotion they felt was based (figuratively) on if they guessed the object in the box correctly. Expectations, developed randomly, are raised for the child, then elevated or crushed in front of them. Students then gloat or feel defeated.

Think also of the fanciful ideas children might develop. One student might think the lid will lift up and spin around. Once this idea enters a mind, it is hard to shake, despite the demonstration. Given the way children can be apt to think, while the teacher may be doing the demonstration, now the student is thinking about how the lid might raise up and fight off bullets from bad guys, not even paying attention to the lesson.

Further, this is not how forming a hypothesis works. A hypothesis is formed when a person notices, in reality from their own observations, a potential causal relationship between two things. For instance, “Going outside in the cold makes people sick.” Or, “Stress from life gives people ulcers.” After a person develops a guess as to a causal relationship, the idea then needs tested, using disciplined scientific principles.

People make theories about all sorts of things, most of which never get tested or verified, but taken as truth. Treating them as but a hypothesis brings scientific rigor to them. It says, “That’s a nice idea you have. Now let’s see if it is true.” (And going outside does not  make a person sick and stress does not give people ulcers.) This is the real purpose of the scientific method: To bring precision to the observations people make, to turn “common sense” into established science.

To show a better way of teaching, it is interesting to study, per the examples given above, the very story of Papin, who first thought of using steam as a source of energy, which indeed spurred the entire Industrial Revolution. This is from Montessori’s Spontaneous Activity in Education:

When we study of the life of Papin, we marvel at the culture which placed him on a level with the most learned men of his times: as physician, physiologist, and mathematician, he was distinguished and honored by the universities of England and Germany. Nevertheless, what gave him his value to humanity, and hence his greatness, was the fact that his attention had been arrested by the sight of the lid of a saucepan of boiling water raised by the steam. “Steam is a force which could lift a piston as it lifts the cover of a saucepan, and become the motor power of a machine.” Papin’s famous saucepan is a kind of magic wand in the history of mankind, which thenceforth began to work [Pg 226] and travel without fatigue. How wonderful are such stories of great discoveries arising from humble beginnings, and working miracles throughout the world!

It was being struck by something simple in reality, a rising lid of a saucepan of boiling water, that caused this stroke of genius. Montessori, who developed a radical and powerful educational paradigm, discusses what creates such genius. She argues that it is accurate observation, reducing complexity, and focusing on particular things that spurs genius. She writes:

Even at the “central point” of discovery, it is only by accurate observation and a very simple process of reasoning, of which most persons would consider themselves capable, that the discovery is made. At most it is due to a marshalling of “evidences” which, however, passed unnoticed by all but the discoverer.

We may say that genius has the faculty of isolating a fact in the consciousness, and of so distinguishing it from all others that it is [Pg 223] as if a single ray of light should fall upon a diamond in a dark room. This single idea, then, causes a complete revolution in the consciousness, and is capable of constructing something infinitely great and precious for all humanity.

If it is desired to create scientists and geniuses, I would argue it is observers of the world we should create, not guessers.

In the Montessori system, lessons are taught in a very clear, direct, informative way. If showing what steam does to a lid on a pot, it would just be shown. Many things are simply shown to children in the Montessori system and in very simple ways: Length, width, size, texture, color, and so on. Children then have a new concept in their brain, and it allows them to then notice that concept in the world. It allows them to “see” the reality of them better: to categorize it, to remember it, and to possibly make these types of strokes of genius more readily.

My issue with how hypothesis is taught is that it directly challenges this view of education, where lessons are simply explained. As a rule, information should be presented to the child before asking questions, not after.