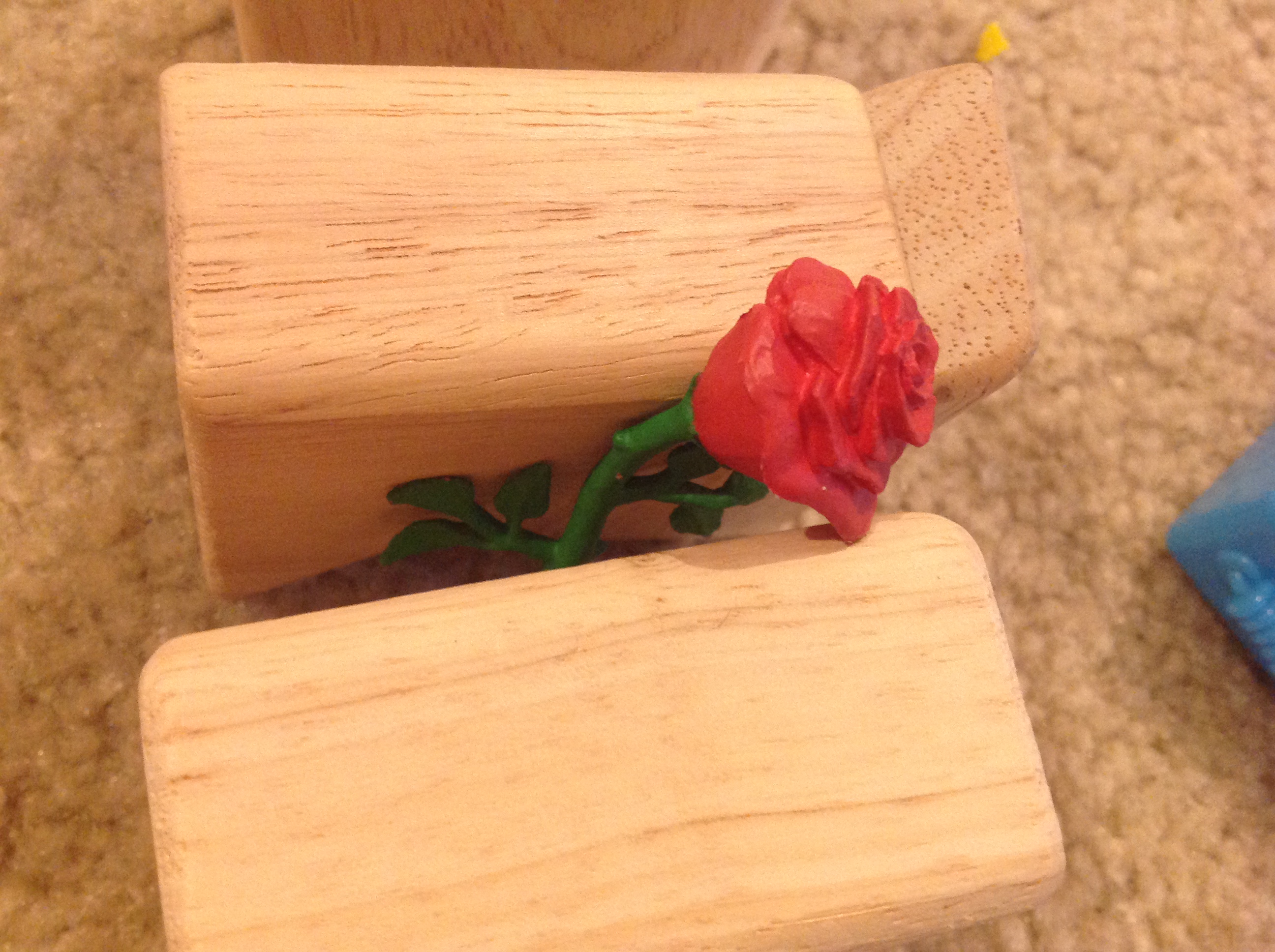 One thing that has been really powerful in reinforcing story comprehension in my preschooler has been putting on plays about what we read. As a rule, I keep the production of the play very, very simple. You aren’t going to find me cutting out refrigerator sized cardboard boxes. 🙂 I focus on understanding the plot and recreating it as best as possible, with materials we already have. These plays have had enormous benefit for my preschooler.

It started when my son was just shy of 3 years old. We put on a Cinderella play. I was a little hesitant to do it, because there is always a balance of letting my son do an activity on his own versus doing something entirely for him. In Montessori, a child is given a lesson, then left to do it. If they don’t want to do it or if they are not persisting at it, the lesson is saved for another day. Well, a play is quite a bit different, because it is a very big “lesson.” Certainly when I put the play on for him, I did most of the work. Should I have?

I think the answer has proven to be an unequivocal “Yes. ” For that first play, though I did most of the work, I was in amazement as he filled in some details I missed, such as that the cat belonged in certain scenes. He clearly understood much of the movie, at just 2 years old. Cinderella is a perfect first play and movie, I think. It is not terribly scary and there are plenty of cat and mouse chase scenes to initially capture a toddler/preschooler’s attention. With my son, I did a lot of Cinderella “work,” including watching the movie, reading a book, and putting on plays. This is a scene from one of our plays. We had the opportunity to build a staircase out of Montessori pink cubes: 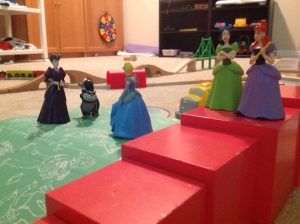 When my son just turned 4, I was able to take him to a Cinderella ballet put on by a youth group, which lasted about one hour. He sat through the whole thing, demonstrated an understanding of what was going on, and completely melted when Cinderella and the Prince danced. But – Sorry to the people around who had to put up with a 4 year old’s questions throughout!  :\ (We were at a matinee … )

Us at the play: 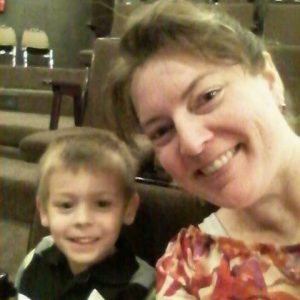 We also put on a Goldilocks plays. That was great because we got to explore concepts of too high, wide, hard, soft, etc. My son kept changing who played Goldilocks. Goldilocks was played by a train, then a stuffed bear, then a race car. I was really happy to see him learning that it’s the same story even if different actors are used. We had built chairs out of wood blocks: too tall, too wide, and just right. As Goldilocks changed, what chair was “just right” changed, on my son’s initiative. A tall stuffed animal found the daddy bear’s chair just right, and a long race car found the mommy chair’s too wide chair just right, when sitting on his side. It was great to watch how my son was actually thinking about what would fit the Goldilocks figurine he picked. And, in this play, though I narrated it at first, he eventually took over and narrated the entire play, which he did over and over. Montessori principles were kicking in: He was working through a big, difficult–but, fun–challenge, happily, entirely on his own.

I was pretty surprised this past weekend when we put on the movie Beauty and the Beast and my son said, “Let’s put on a Beauty and the Beast play!” Woah! Montessori principles–of children picking their own activity–were kicking in big time. I had suggested he build a castle out of wood blocks. I was expecting the outside, with towers. When I went to our toy room, this is what I found:

He had built a dungeon for Maurice (Belle’s father, who is put there after getting lost and entering the castle) such that we could put on a play. He also built a library, a ballroom, and an entrance way to get in and out. He tried to suspend the enchanted rose: 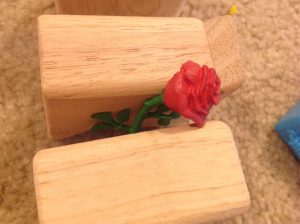 My son is the one who forwarded most of the plot. I was stunned he had remembered any of it, because he kept running away from the movie we were watching to play in the toy room. We do have a Beauty and the Beast book that we have read about a dozen times. In my son’s play, Maurice gets around by a Lego airplane, not a horse. He made Maurice, played by a Lego guy, look very inventor-ish with a backback and gidgets and gadgets coming out of the backpack. Bell was played by a lego figurine we have of Marge Simpson’s sister. Yup, that was our lovely Belle. To put a yellow gown on her, I had suggested wrapping her in yellow Play Doh, something I had seen done on YouTube. I was really thrilled to help him get resourceful in putting on our play, and to even accept that it is difficult to recreate the movie exactly, given limited resources–but we still try, don’t we?

Now, plays are a thing. After watching WallE, he wanted to put on a WallE play. (It was too late to do that night.)

When I look back at my youth, those stories that I put on a play about, I think, resonated much deeper in me. I remember vividly a babysitter organizing a play about Snow White with me, my siblings, and the neighboring family’s children. I have thought about the lessons shown in Snow White in my adult life: How older people may be jealous of younger people’s talents. I did not have much of a literature education, but these classics, told pretty widely and commonly to children, I did learn. And they helped me make sense of the world as an adult.

I am going to argue that putting on these plays, even if you narrate the entire thing for your child at first, are a very Montessori-like activity to do. The most important is that it is hands-on. The student actually recreates the story; they are not just a passive listener. In Montessori, the children work with the material. The goal isn’t that they finish the lesson, but they get hands-on practice with the material. It is as they practice, including and especially as they make mistakes, that they are learning. The material itself is designed to awaken the child’s mind to reality: to start to see height, width, size, color, etc. Activities are given to children to encourage them to start to notice more about reality. For instance, a coloring page of familiar objects. The child must then select the proper color to use. The next time they see the object, they may look at it closer, to notice it in finer detail. That is what the play does. As the child must recreate props for scenes or move actors around, they may notice more detail about the story the next time they watch or listen to it.  And my experience, as outlined above, is that there is a gradual progression from a teacher-given lesson, also central to Montessori, to the child eventually taking over the lesson themselves–doing it willingly and eagerly. Even if the process takes an entire year. 🙂