Skip to content
Posted on May 17, 2017 by Amber Posted in Elementary Education

I have been teaching my children, 2 and 5, the lyrics to the Frozen song, “Let It Go.” My 2 year old loves to sing and especially this song. I wanted to help her so she doesn’t mumble through the lyrics. I also love the message of the song and movie. The movie is about the dangers of emotional repression and not allowing a child to practice their unique skills. Elsa has the power to create ice, but it is dangerous especially as related to her emotions, so her parents tell her not to use them and to conceal her emotions. In “Let It Go” she runs away to an area with no one around to practice her powers. It is her first transition. Her second transition is when she accepts herself in a loving way, thus can manage her emotions, and thus can come back to her home. (How many reading this identify with Else and these two transitions? Hands up here …. drop me a note if you are another 🙂 )

The lyrics are in italics.

I taught my kids “isolation” by doing the below with zebras. We got to talk about how it would feel if all of the zebras were doing something they shouldn’t and only one was “isolated” out and punished.

The wind is howling like this swirling storm inside
Couldn’t keep it in, heaven knows I tried

It’s easy to teach “howling” by howling. The book Bear Snores On describes winds howling on a winter night as well, which I read to them, and we talked about.

I taught my son “conceal” and “exposed” by having him hide behind a table then exposing himself. This lesson was a big hit with a 5 year old boy. He is always asking how he can blend in or camouflage himself.

To teach how distance makes things small, I put a triangle block on a floor then went up to our balcony and looked at it. It looks small, and you can see more from further away. My son really liked this lesson.

It’s time to see what I can do
To test the limits and break through
No right, no wrong, no rules for me,
I’m free

To teach “test the limits,” we put on a Frozen play. Except my son’s powers were building wood blocks. This was great fun. He went in to his room to isolate himself, not allowed to play with wood blocks. This was after we pretended to hurt his sister with the blocks. She, at 2 years old, happily played the unconscious damsel in distress, which made this lesson completely and totally worth it itself. Then he came out, got angry (from his sister taking his things, which is what he said makes him angry) and he threw threatening triangle blocks everywhere. Then we tested the limits of wood blocks, to see how high they could go! These lessons are fun, really! 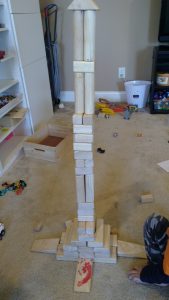 On her own, my daughter races up our stairs at this point. We have a platform at the top. She stomps her foot like Elsa does at “Here I stand.”

What I liked best about making a lesson based on a song like this is that it inspired me to do lessons I might never have thought of. In fact, a concept I had never even heard of! I did not know what a “fractal” was until I read these lyrics. But, they sure are fun. I made some with my kids out of perl beads. Here are some. I am a bit obsessed with making fractal perl beads, honestly. I have many, many more in mind. 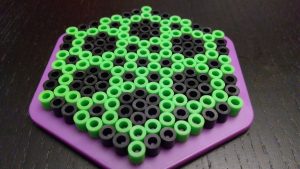 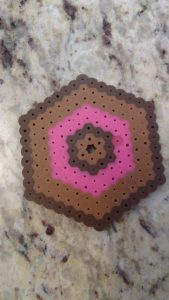 To teach what “crystallizes” means, we made Borax crystals. This was a lot of fun! It again is something I might never had thought of without using the song as source material.

Making crystals is, in my opinion, the best way to teach “dissolved,” “saturated,” and “super saturated.” You can easily design the lesson to teach these things, and at the end of them, there’s this: 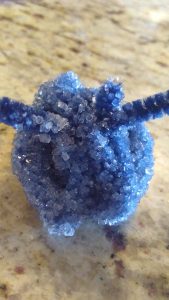 Let  it go, let  it go
And I’ll rise like the break of dawn
Let it go, let it go
That perfect girl is gone
Here  I stand  in the light of day
Let the storm rage on
The cold never bothered me anyway!

It’s hard to be absorbed in this song and not be brought to tears when you hear, “and I’ll rise like the break of dawn.” Maybe one of these days I’ll get up early and we’ll watch the sunrise. 😉