I read something about letting children lose at games that I strongly fundamentally disagree with,

“One parent was aghast at my suggestion that young children shouldn’t always win. She asked, “Are you saying I shouldn’t let my five-year-old win at chess each time we play? He’s just little.” I responded by asking her where she thought it best her child learn about not being the winner all the time. She contemplated this question and conceded that perhaps she did have a role to play in preparing her son for losing on the playground at school.” — Rest, Play, Grow, Dr. Deborah MacNamara

I strongly disagree with this. I strongly feel it is OK to make accommodations to let a young child (between the ages of 3 and 5 approximately) win or avoid losing.

My work on child development has shown that between the ages of 3 years, 10 months (and younger no doubt but it really kicks in at this age) and about 5 and a half years, children love to win and absolutely hate to lose at anything. However, around 5 years, 5 months they become competitive and goal oriented such that their own internal drive makes them want to win. They can understand winning and losing. They can use an understanding and acceptance that they can lose to get better at a game. By 6, they not only can handle losing, they might wisely say something like “not everything is about winning or losing.” My son at 6 years, 4 months, who we made accommodations for all throughout his preschool years when it came to winning and losing, now faithfully follows the rules of any game. He also plays in a determined way, and often, no usually, legitimately beats us at many games, especially logic games like Connect 4.

What I take especial disagreement with the approach to “not rescue” young children from losing is bringing this idea of a life lesson into a playful game, especially for a child not developmentally ready to handle loss. So many parenting authors preach to let children be little and not rush them to maturity. Yet here we are bringing this lesson, as parenting authors literally say, on “life’s futilities” to a young child. Literally that’s the lesson intended is to realize you will lose sometimes. The same authors deride early education as essentially emotionally abusive to the child. Well it is little wonder that they think education is abusive, given they preach to give major life lessons during what could have been major brain building lessons.

Games are a wonderful way to help build a child’s brain. The game itself, the process, is what is the valuable part. There are many brain building skills that can be had while playing a game. If you are into games with children and/or you want to build their math skills, I can’t recommend the “Let’s Play” series by Denise Gaskins enough. Her book Let’s Play Math outlines her philosophy and then she has several books about games to play to learn math skills. For the preschool years, we use Addition and Subtraction Games.

Here is one game. You make a 6 X 6 grid and fill it in, twice, with the numbers 1 – 18, which will then fill up the 36 squares. You then roll 3 dice. You can add or subtract the numbers on the dice and put a token on the resultant number. We play that if you get 3 in a row you win. Here is an example of an active game board: 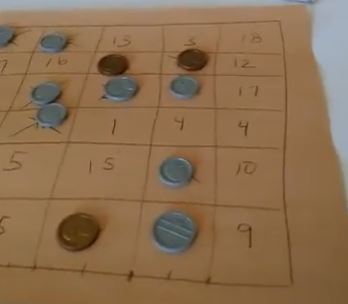 My daughter, 3, also loves to play. She always adds the numbers, and that’s OK. Here are screen shots of her adding dice. She successfully added 5 + 3 + 2 and got 10. It’s a thrill to her just to put her token on the 10 square. 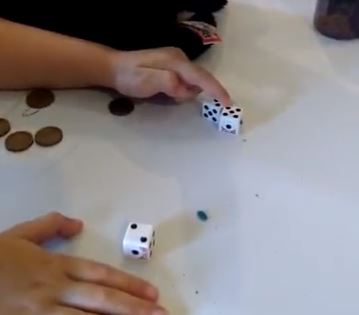 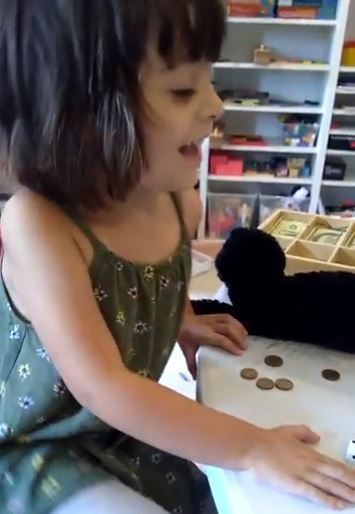 What I find is my kids don’t especially care about winning or losing this game. When one of them gets 3 tokens in a row, they ask to keep playing, even though they just won. They love the game so much they just want to keep going. I love this kind of process-oriented game which is fun in and of itself while building all sorts of skills. This is it; this is the jam; this is what is to be preserved. 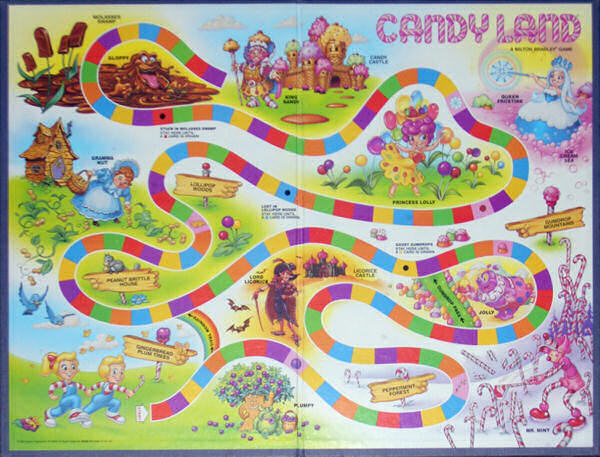 It is painfully obvious for a child when playing Candyland who is in the lead and then ultimately who won. As you go along the trail, that is easy to see. Further, the game is pure luck. A child of 4 has a remarkable understanding of rules and can use those rules to their advantage. It is a perfect age to let them play a game with strategy. But in playing Candyland, you are asking them to rely on luck and to simply obey the cards. My son, at 4, often “cheated” at this game by trying to pick the card he wanted, and I can’t really blame him. This kind of obedience is not really a skill I want for my children, certainly not if I have to put up a fight to instill it. My son had major meltdowns when playing Candyland. To play it at all when he was only 4 or 5, we took some of the special cards out which would send him really far back if he had terrible luck. In my opinion, play Candyland with your 4 year old at your own risk.

I think the fun of Candyland is the colorful board with the pretty characters. Who doesn’t love the Ice Princess? A game we liked in lieu of Candyland is Monopoly Jr. You go around the board and land on interesting things just like in Candlyland, except it might be Jail or the Toy Store. My kids like to pretend they actually are in jail. Monopoly Jr. involves some math so there is some skill. And my children almost never finished to completion to realize who won or lost.

This is what I am saying: favor games in which who wins or loses isn’t terribly obvious or which the child may not even care about. For instance, when you play Go Fish, do you really care if you win or lose this game? I had to look up how to win or lose this game because I didn’t care too much to notice how it worked when I played all those years as a girl.

Even with making accommodations to let young children not lose, they will still inevitably suffer some kind of defeat. See, that’s the thing. Life will have losses and defeats. It will. I promise you. There is no threat whatsoever of a child growing up without ever experiencing some kind of defeat. When it legitimately happens, that’s when you can help them through those emotions. I simply say “it’s tough to lose.” I validate their emotion. And that’s really it. I don’t try to work directly on it. I trust that developmentally they go through this stage and they will eventually outgrow it.

All I am asking is that you wait until a child is older, somewhere between 5 1/2 or 6, until you purposely go hard on them during games, the age at which you will find they actually love a challenge. At this age, they actually have more than a fighting chance to beat you–in fact, you may be surprised that you are the one consistently on the losing side. And that’s the other thing: you really don’t have to actively teach them how to lose. They have it in them to handle it, and to handle it much better than anything the adult will try to teach. Until then, yes, “shelter” them from something which they cannot emotionally process yet.

I believe in early education for children, and I strongly believe that the joy of it must be preserved. When you insist on thumping very young children on the head about “life’s futilities” by “not sheltering” them from losing a game, you just made it seriously un-fun. I want you to imagine me standing at the door staring down these ugly, adult invoked (through negligence) emotions in children, pointing to the outside, saying, “Get out!” We don’t need to create any emotion inside them either, such as an internal itching or anxiety that they never know enough to drive them to keep learning. They are built to learn. If you preserve that joy of learning, they will keep learning in a self driven way, continuously expanding their own knowledge. Having this ease and joy and competence is exactly what can get them through life’s difficulties, putting them in a position of strength.

I love this photo. I think it encapsulates a lot. It is my daughter with a hat on her whole head, a potentially distressing thing. But notice the ease she has about it. This is the kind of internal state that I find so valuable. It is not one I actively create in my children but rather just is. It’s already in them. Rather, the potential is in there and if I create a safe home environment, it is actualized. My main job is to not get in the way of it. A human’s resiliency is much more than you can ever imagine. You can’t control or create it; just be awed by its awesomeness. 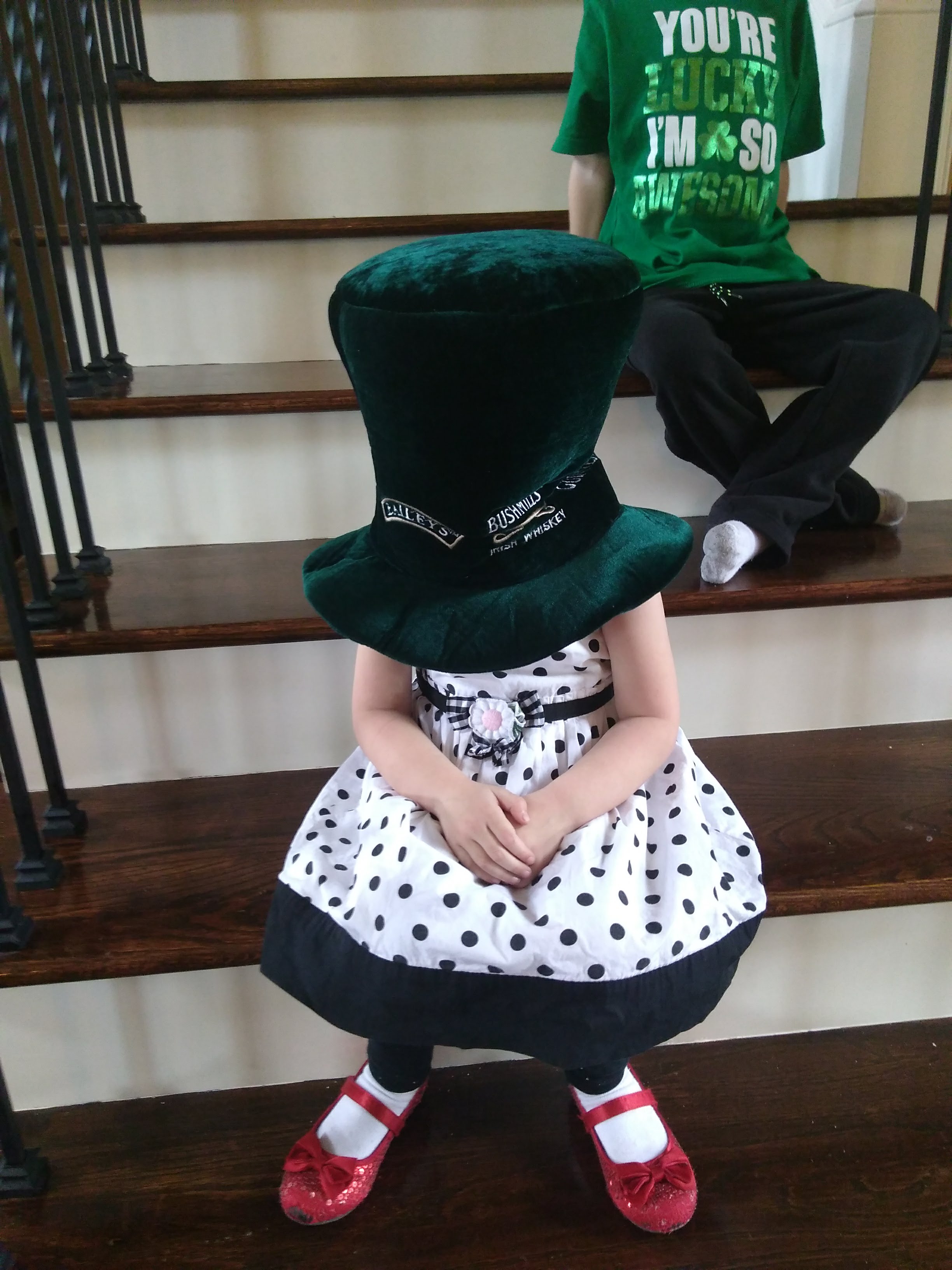 This is one of the main ideas behind my book series, Misbehavior is Growth. It is about the developmental milestones that children go through. See my tab up above, “Child Development” to see the milestones. It’s about understanding the new growth inside a child and using it to develop educative activities in high alignment with their age. You grow a child through investment in their skills, not punishment or lessons on “life’s futilities.” Skills, skills, and more skills, followed by skills and activities and a healthy management of their emotions all along the way. Back off of them at developmentally sensitive times and invest harder during developmentally ripe times. Learn to know the difference and how to ride the river of their development like an expert!

See my first book Misbehavior is Growth: An Observant Parent’s Guide to the Toddler Years