When my first born turned 2, I thought “OK, this is it, the Terrible Twos. Now we are in for it.” Then they never happened (other than some occasional bossiness and refusal to put his clothes on, at what I think were natural stages, which I am documenting in The Observant Mom: Toddlers). Then when he turned 3, I thought, “Ok, this is it. The Threenager Years. I have heard this is the actual age of tantrums.” There was some minor blips in behavior right when he turned 3 and then some late nights as he, again, went through what I think are natural stages, but, otherwise, 3s were a dream. Then my son turned 4. I thought I was smooth sailing, having made it fully past the toddler years. But right at 4, my son went bonkers. We had issues with him harassing his sister, throwing toys, throwing cups, and so on. I didn’t think it was possible. So many people tell me how awesome the age of 4 is. Surely, as kids get older, they just naturally get calmer and more mature, right?

I strongly credit the advice I got in various parenting books as to why I had a good experience with my son at 2 and then 3 years old. In particular I credit the book Liberated Parents, Liberated Children. The book teaches you how to deal with emotions. And emotions are what being 2 and 3 years old are about. I mean, of course, I also tried to provide many intellectually engaging activities, of which themselves contribute to a more disciplined child. But to handle tears, getting a child to do as asked occasionally, getting them to leave the playground, and so on, you need to understand emotions. So, I thought I had these down pat: Why was I having such trouble when he turned 4?

Some background: Just weeks before my son’s fourth birthday, we moved to a different state. I was also in my first trimester of my third pregnancy. It is entirely possible that these things affected my son greatly. There is something to be said about knowing what the “rules” are in a house–then having a totally new house, with totally new things to throw toys down, new doors to burst open, and such.

However, outwardly, he never had a problem with the move. His only problem throughout the whole ordeal is when people came to see the house we were selling. He said they were going to “steal” our house. Otherwise, he really loved the new house. I am cautious to blame the move alone. And this is the heart of all parenting problems: is what we are dealing with a stage? Or are we failing him somehow? Or is it circumstance? The answers do matter. I am writing this for anyone else who might have a 4 year old who went bonkers. I will have more 4 year olds as my other children grow older. Is this a stage to know about? And, if so, what is the best way to handle it?

So, I got to reading. I read Positive Discipline: Preschoolers. I have a review with main highlights on this blog. The book didn’t entirely help me, though it did remind me about family meetings, how to run them, and that I might introduce them at this age. What did help me, strangely, was a book about teaching Grace and Courtesy to preschoolers using the Montessori Method. The book reminded me that children need to be taught how to behave. It reminded me that the lessons I do with my son need to not just be math and reading, but also things like: how to shut a door quietly, how to ask his sister for something nicely, and, as I found out later: what to do when feeling angry.

I ended up writing down each issue one by one and addressing each one differently. Ultimately, for each one, they involved some coaching and teaching on my part, as well as some understanding of what he might be going through. This is what I found that 4-year-olds need the most: Strong guidance and clear lessons of expected behavior.

My son responded well to this. He followed the instructions to the letter of the law. For instance, one time he hit me with a toy golf club. I immediately took it from him. Later he told me, “But I didn’t hit you; I hit your golf club.” And that is what he did, though it nicked my hand. This “I technically followed the rule” is characteristic of a 4-year-old.

The issues and how we handled them:

The other thing he clearly needed was my time. I got help for my pregnancy fatigue such that I could be present with him more. And, when I am, he curls up into me and says, “I love you, mommy” or “I really like being with you, mommy.” He tells me when I am absent, “I am very lonely when you aren’t here” or “I am very sad when you aren’t near me.” We had to do a very big “connect then redirect.”

I was happy also to know a Montessori teacher who told me 4 year olds actually tend to be less calm than 3 year olds. Certainly, this is what I found.

As children grew, not only can parents use different parenting tools for the child, the new tools become necessary. The big ones we added were a family meeting and more coaching/guiding. I was pretty stunned at the family meeting how many emotions came flooding out of my son as we talked about things. He was dealing with some big issues and big emotions! I am still figuring out how to run these, and how often, with a 4-year-old. It is recommended to start them off with compliments. I found that my son’s behavior is markedly improved after we have them. He genuinely tries to do as asked.

I also struggle with how nuanced the rules can be. For instance, he and his sister LOVE to rough house. But it gets out of hand sometimes. I don’t want to stop this clear fun they are having. I have read that healthy sibling relationships are linked to how many fun memories the siblings have. But I need to keep them safe. So the rules currently are “No rough housing on the couch, or the bed, or lifting her up, or tackling her, and if she doesn’t like it, stop.” Should I simplify this to only be “No rough housing”? He does try to follow even the nuanced rule. One time he pushed her back from getting a toy he had. He said, “I didn’t lift her! I gently pushed her away!” Ok, fair enough. 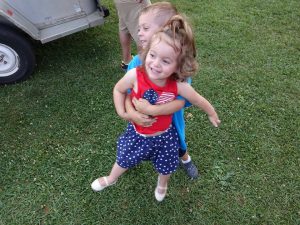 I do think all of this is a stage. Before even having problems, I called the new stage my son was going through, “The Lawyer Stage.” This is because his thinking became very nuanced and he started putting together little cases for himself. He could take in several variables and come up with an exact solution that satisfied all of the usual rules, at least the spirit of the rules, but put himself at an advantage. Two examples of what we noticed at this stage:

Things are a lot better. Not perfect, but better. Maybe 80% of the problems have gone away. I am delighted when my son, on his own, takes his cup to the counter or throws away garbage. He tells his sister when she gets nervous around him, “Don’t worry baby, I wasn’t going to take your toy.” We can take baths again without water going everywhere.

He has also taken a deeper interest in many academics. He is starting to add, without having to count the objects (something he has practiced a lot); he has taken a moderate interest in sounding out words; he is starting to make change with money; he really likes board games; he builds Marble Runs now; and so on. A friend tells me her 4-year-old, just one month older than my son, also showed an intense interesting in reading and math. This all further points to a leap (a stage) in development, which are marked by fussiness (going bonkers) then amazing leaps in ability.

As always I hope you get out of my blog the following:

2 thoughts on “My Temporarily Bonkers 4-Year-Old”