Skip to content
Posted on March 15, 2017 by Amber Posted in Elementary Education, Montessori

I finished Montessori’s To Educate the Human Potential. It’s a short and enjoyable read. It’s about elementary education. Here are my main takeaways.

I especially liked Montessori’s discussion about how important man’s unconscious mind is at learning something. She writes:

The working of these complexes is of immense importance in education. In accordance with these discoveries, we are now advised not to labour at memorising some important piece of work, but rather to con it lightly and then set it aside for some days without quite forgetting it, so allowing the engrams time to organise themselves in concentration. This is exactly what is observed to happen in a Montessori School, where children’s revelations of their own mental processes have anticipated psychological research. Children are often seen walking alone by themselves while others are working, for just after learning something they feel the need of quiet; on return to the class they will show new ability, just as a child returning to school after holidays finds himself able to understand what was obscure before. In the light of these facts, how futile and even mischievous appears cramming for examinations!

I have noticed this so many times in myself and children. When studying for a test, I would study 2 nights before. Something about getting sleep, reviewing, then sleep again, helped me learn the information better. I notice with my children when I present a lesson, it’s best to wait until the next day to ask them any questions about what we learned. Something about the night’s sleep helped.

How many times have you had an “aha” moment while brushing your teeth or taking a shower? The argument put forth seems to be that, after being presented information, your unconscious goes to work to categorize it and integrate it with other information, causing you to perhaps make a connection between two things or apply a newly found solution to an old stubborn problem.

A key takeaway from this is that humans learn more from experiences. From Montessori, “Children show a great attachment to the abstract subjects when they arrive at them through manual activity.” She writes about a few of the activities:

For instance, the children learn the laws of pressure and tension by being asked to build an arch of stones, so placed as to hold together without need of cement. By building bridges, aeroplanes, railroads (calculating the curvature), they become familiar with the principles of Statics and Dynamics as part of the daily school routine

My children aren’t old enough yet, but I favor project-based learning. This seems quite in alignment with what Montessori says. I invite your thoughts on this, and what part lectures may play in education.

As is wonderfully typical of Montessori, she writes to bring children in touch with real things and real facts as much as possible, to not separate these as “boring” with fiction as the only thing worthy of excitement. History is exciting; it’s full of heroism! She writes:

Educationists in general agree that imagination is important, but they would have it cultivated as separate from intelligence, just as they would separate the latter from the activity of the hand. They are the vivisectionists of the human personality. In the school they want children to learn dry facts of reality, while their imagination is cultivated by fairy-tales, concerned with a world that is certainly full of marvels, but not the world around them in which they live.

Montessori gives a pretty decent overview of history in this book. She gives some of the highlights, of the formation of the universe, how very delicate the conditions had to be for man to survive, the Egyptians, the Greeks, and many others. I enjoyed reading her take on it.

My own takeaway from this is to present history in the format of Struggle/Triumph. For instance, if teaching the periodic table, to first teach the struggle people went through to develop it. It gives more of an answer to “why was this important?” Certainly such lessons can also be moral and character building lessons as you study “case studies” of what worked for people to accomplish a certain goal.

One thing has been well established by our experience, that facts are of less interest to the child than.the way in which those facts have been discovered, and so children may be led to the history of human achievement, in which they want to take their part.

I have found a few resources already to teach history to my preschooler. I have found a few video documentaries that give an overview of the formation of the earth. My son loves all things space and dinosaur, so he likes watching these documentaries from the time of the Big Bang through to when dinosaurs die off. These are on YouTube. We have several. He likes to call them up often and watch them.

Many mothers have told me their children really liked the “Story of the World” series by Susan Wise Bauer. I really look forward to reading these with my children. I think he might be a bit young, at just 4 years old right now.

Montessori describes how they present an overview of history to the child on a timeline. There are several topics presented, and they are presented over and over. She writes the point is not to memorize facts but to give an appreciation for progress.

I have done this lesson with my preschooler, for things he is interested in, and it is a huge hit. We did one on the timeline of the formation of earth and dinosaurs. Below is a timeline with major events on it. I happened to have bigger pictures of the same pictures on the timeline laying on the table. My preschooler picked them up and put them in chronological order. I will always do timelines like this from now on, with small pictures to tape onto the timeline and bigger ones for the child to play with. 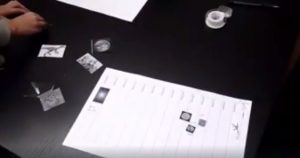 I also did one on when the Princess stories were written, to start to give an appreciation for what a culture may have been like in the 1700s, 1800s, or 1900s. We’ve also placed princesses on a map to give an idea of what culture at a place and time was like. 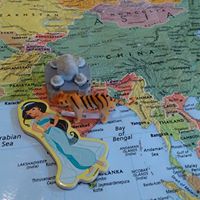 I will be looking for stories of pioneers and a way to instill a love and appreciation of this. I find the free market often does have things that are ready made to use. I just need to look some more. I invite your recommendations.

Every subject of our interest and study can be related to human beings, who have toiled, often starved, to overcome obstacles for its understanding, and to give us knowledge free of such pains. Everything is the fruit of a human soul, and we incarnate this fruitage in education, this treasury of riches handed on to us by man. We must ourselves feel—and inspire in the children—admiration for all pioneers, known and unknown, possessors of the flame which has lighted the path of humanity.

The child should love everything that he learns, for his mental and emotional growths are linked. Whatever is presented to him must be made beautiful and clear, striking his imagination. Once this love has been kindled, all problems confronting the educationist will disappear. The great Italian poet, Dante, has said: “La somma sapienza e il primo amore,” or “The greatest wisdom is first to love.”

I really love the following quote. I read through facebook so often about how children do so much better after given more recess. It’s nice to hear something positive for the kids, but I see it as a temporary escape from an otherwise unnecessarily grueling day of school. They are made to sit too long; focus on a topic they aren’t interested in; and so on. Here is Montessori on the very topic:

… the best they could do was to compromise, reducing hours in instruction to the minimum, cutting out from the curriculum grammar, geometry and algebra, making outside play obligatory and postponing the age for entry into school. But however much free periods have been increased and children urged to play rather than study, strangely the children have remained mentally fatigued notwithstanding all these reforms. Montessori schools have proved that the child needs a cycle of work for which he has been mentally prepared; such intelligent work with interest is not fatiguing, and he should not be arbitrarily cut off from it by a call to play.

And finally, another insight. Dr. Tsabary writes about “enmeshment,” where a parent can’t see that their child is different than them. They can’t see that the child has different problems and different talents; that the child is not just on a journey to become what their parent was. When I look at the course of evolution, and how all of life came from tiny worms in the sea, I look at my children as destined to be totally different from me. They have but 1/2 of even my DNA, and even in combining with another human, what results is not half of one and the other, but could be something mutated, however slightly! In addition, there are many other varying things causing them to not simply be a carbon copy of myself. Here is Montessori:

The old-fashioned teacher subconsciously made an exaltation of his own virtues. He was perfect, in the sense of knowing what should be done and what left undone. He had empty beings in front of him to be filled with facts, and created morally in his own likeness—God help them! Those beings who still had in their souls another far greater creator were forced to resemble the teacher, who was resolved to mould them to his model of “goodness” or punish them for disobedience. Such a teacher is not even a tyrant, for it takes intelligence to become a tyrant, after the historical precedent.