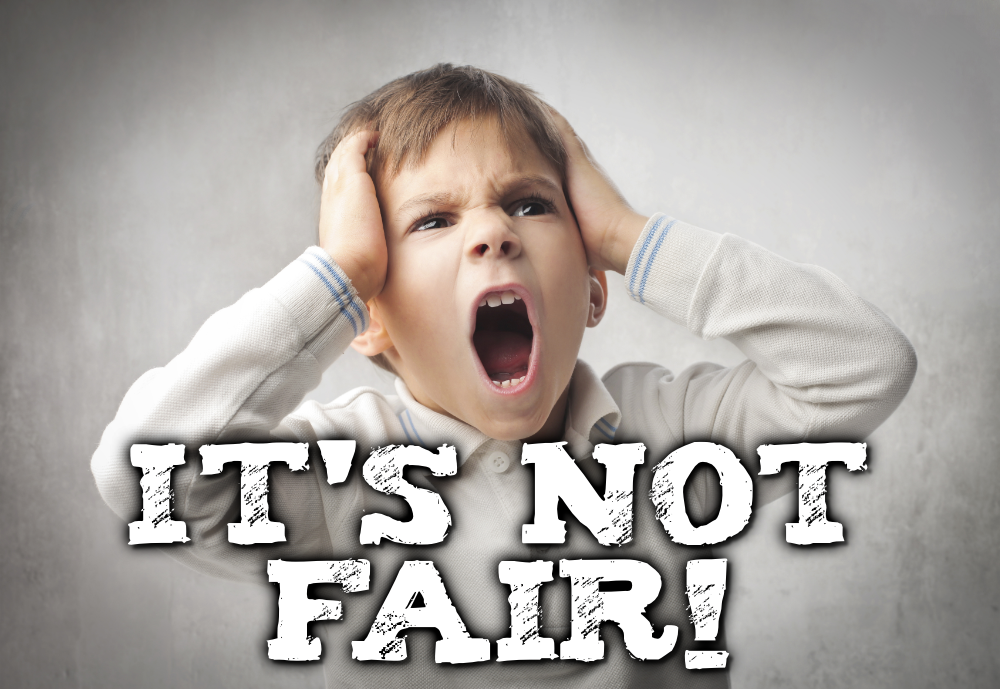 In Part I about young sibling rivalry, Young Sibling Rivalry: What is Fair, I described the one rule we have in our house: That whoever was actively engaged in a toy has a right to use it until they are done. This helps to make everyone feel safe to play and learn.

This does not however cover all situations that might arise between two small children. Also, even if this very rule can apply to a situation, some parental skill is needed to gain cooperation in adherence to this rule. Let’s look at an example.

It’s true in this situation that one person was actively using the toy and the other wasn’t. Thus, per the one rule we have, the active user has the right to use it. But this is not how the child sees it. Picking one side or the other, even if fair to a stated and known principle, will result in one child feeling deeply wronged.

I notice that many people come out of childhood thinking they were deeply wronged by their parents. Now that I am a parent, I see how when kids squabble, they BOTH feel, to the depths of their soul, that what they want is the right side. In this example, one child is thinking “I had it first!” The other is thinking “I am using it!” A parent who enforces their sense of justice on their children, who picks a side among the children–no matter how very loyal to a fair  and known principle they are–no matter how unbiased they are in applying the rule–will create deep resentment many times over in their children.

Here is a much better way to handle this problem. Say to the child,

This in and of itself might solve the situation. Both children feel heard and seen: Mom notices they are frustrated. They both might now understand that the other is frustrated too. They are given information that they might not have had: One child was actually using it, but then temporarily abandoned it. Or: One child might remember the rule. It’s entirely possible that one child will decide to use some different train tracks to build their own, or they agree to work together, or one simply remembers the rule and backs off.

This is the first response to have to all conflicts: To be an observer, reflecting back to children everything you see: what happened, how the children feel, and repeat back to them what they say. Describe the situation to all involved parties, let everyone feel heard, and raise the awareness of the children involved. This is a positive parents’ primary role: To be an Observant Parent. 🙂

People often think of “fair” as adherence to an external rule or principle. I jokingly entitled this “Forget fair.” But I am going to propose a different way of thinking about what fair is: That all people feel their needs were satisfied. In the previous example, would it matter that the active user got to keep using the train tracks, if they were genuinely fine with using a different set of train tracks? Ultimately if everyone involved feels their needs were satisfied, is this not what is “fair”?

The original rule we have in our home is meant to make the children feel safe. They should feel that if they are using a toy, and they want to keep it, no one is going to make them give it up. However, when conflict arises, and more information is given to them (“It looks like your brother wants to play with you”), they might change their mind about what they want to do. What is most important is that each child’s need was satisfied.

For any problem that arises, after observing and giving some empathetic feedback, I look for solutions with my children. I don’t especially care what any rule is. Let’s say one kid asked for popcorn. Then the other comes screaming, “NOOO!! That first popcorn is MINE!!!” If the first child doesn’t care if the second one gets it first, why force the issue about what is “fair”? Here is another epiphany I had: No in-the-moment conflict should “teach a lesson.” Some may say the one child needs to learn to wait their turn. This is probably true. But this is a lesson that can be learned later, separately. You can start talking to the child about waiting their turn while things are calm by reading a book, putting on a play, or even having them practice in make believe scenarios. For me, for in-the-moment problems, I am concerned about one thing and one thing only: What is a solution that everyone is happy with?

One last thought: Remember that children model what you do, not what you enforce on them. I find my children very often work to find solutions with each other, rather than fight with each other over who had it first, who was using it, whose it is, etc., Not always, but often. They play very cooperatively together. The mantra in our house is to look for solutions, always.