Something I have noticed about my son, who is now 3 years 3 months, is that he wants to do what is right.

The simplest example I can give is a conversation I had with him about French Fries. I have been learning about glucose shocks and what starch (and sugar) can do to people who are insulin resistant, which is a genetic condition. I read that gaining weight in one’s abdomen is an uncannily strong predictor of this genetic condition. I have kept my children away from sugar, but, upon learning about this, and the great likelihood that insulin resistance runs on both sides of my children’s family, now I want to keep them from starch, too. Unfortunately, my son has gotten starchy items at restaurants and is already used to it.

This example (and others) leads me to the conclusion that young children are wired for integrity. They are capable of and want to live by a set of principles, based on information of what is good and what is bad.

I have seen it numerous times now. Another example is walking on the road and sidewalk safely. I have explained to my son that in parking lots and roads, he has to be careful, especially because he is short. A moving car might not see him and might hit him. Now that he is 3, when we are out, I might say to him, “Please get to the side of the road.” His eyes get big and he scurries over to the side, yelling, “I don’t want to get hit by a moving carrrrrr!”

This is opposite of what it was like when he was 2 years old. When he was 2, I would explain to people some difficulties I would go through with my son. Their response was, “Well why don’t you just tell him not to do that!” Well, crap. Why didn’t I think of that? One time I had to pry a pine cone away from him, before getting in the car, because I knew it would go in his mouth on the way home, and be a potential choking risk. A person, without children, was upset with me for taking this toy away from my son, telling me that findings in nature were great treasures for a small child. When I explained the problem of the choking risk and putting the pine cone in his mouth, he said, “I think it would be much better to just explain to him that he shouldn’t do this.” Yeah. Ok. It does not work with a 2 year old. They are, as I’ve read scientists describe them “subrational.”

When my son was 2, if I asked him to put his shoes on, his response was basically, “Chase me!” At 2, he always wanted to play in and around my car before getting in the car seat. Now, at 3, I can say, “Please get in the car seat,” and he does. Whew, is this a lot easier! Many people lament that 3 is worse than 2. I have found I am loving it so far.

Now that he is 3, my son also has a preoccupation with right and wrong. He asks me often about bad guys. We went to a historical park with forts once. I told him forts protect us from bad guys. On the way over, he described to me how he wanted to “Boom the bad guys in the head!” And then matter of factly he said, “That’s a good decision.”

Now that he is 3, he also describes what he finds beautiful. He loves when I am in a dress. I told him once how we were going to rearrange our front area such that there was a coat rack just for him and his rain jackets and hats. He said, “That will be BEAUTIFUL!” This good guy/bad guy and what is beautiful/not discussion did not start until he was about 3.

All of this has deep implications for a how a 3 year old can be treated, as opposed to a 2 or 1 year old. When my son was 1 and could first walk, I would go on walks with him and physically move him to the sidewalk every time he went on the grass. I wanted him to feel that he needed to stay on the sidewalk. I am very opposed to parents who try to yell or punish their children, especially at this age. I have seen moms yell at their one years old, “Don’t run into the road!” Does the 1 year old know what “road” or “run” or “don’t” even mean? Discipline at this age is very hands on and, I read and have found, redirection and distraction work really well. You simply can’t expect a child so young to understand the words, let alone the principles, that you are teaching them.

Now at 3, I rely heavily on giving information. It is very powerful, and I find I never have to yell, but rather I can speak very plainly and factually. Very rarely do I say, “Stop that! Don’t do that!” Instead of saying perhaps, “Don’t shake your sister around in her car seat!”, I say, “Shaking your sister in the car seat will hurt her and make her cry.” He doesn’t want that and he almost always refrains.

Although I don’t have to yell, it is with a feeling of heavy responsibility that I give information to my child, because information itself can be abused too. Telling him that something might damage him or his sister is powerful stuff.

This ability to receive information and then act appropriately, like all things, I believe, is a “muscle” and, like all muscles, can be exercised to make better. This is a great age for “follow the instruction” games. Here are some ideas: 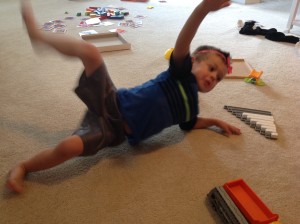