My son, 3 years, 9 months, rode a bike for the first time a few days ago! We used the balance bike approach to accomplish this. This approach has been written about quite a bit. Instead of using training wheels, the child uses a bike without pedals. They are able to learn the skill of balancing without the complication of pedals. They learn how to pedal by using a tricycle. Then the two skills are combined and, as many have reported, children often are up and riding in no time!

Here is how we did this whole process, and the type of language I used to encourage my son to do this. The most important thing is to cherish and value those beginning, timid steps they make–to see them as the very stuff that skill building is made of, and to not get frustrated as they make mistakes at first.

We started out, when he was 2, riding a tricycle. I showed him, by moving his feet, how it worked. We then went out and practiced. As seems to always be the case when first trying something, it didn’t go so well. He used his feet to push on the ground, rather than the pedals. I have learned, over and over, to just let the child do what they want, as they get used to something new, especially at first.

I came up with some activities to give him an assist in learning. One was to go to the top of a driveway that was at a slight angle. Gravity then gave him a little push so the pedals moved.

These are rough notes on how riding a tricycle developed. I did *not* direct any of this; this was the natural development.

1. Used the tricycle by pushing with his feet on the ground.
2. Got ample practice steering. It took a while for him to stop crashing from one side of the sidewalk to the other.
3. Pedaling a little bit in the kitchen, a nice flat area.
4. Pedaling on tricycle rides about 10% of the times, then 30%, then 50%, then 100%.
5. Doing fast circles, coasting after going fast down a hill, and other fun, wicked moves!

When he was a young 3, he mastered a tricycle. 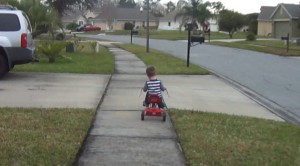 We used a tricycle or his “Glider” to go on walks. He got to be so fast on the Glider, I had to retire it. I couldn’t keep up and he kept getting away! When he was 3 years, 7 months, we finally plain bought the balance bike. He was very, very, VERY excited when it came in the mail. We set it up and off we went …

It again did not go that well on the first day–as far as measurable success anyway. But in actuality, just getting out on the bike, without anything tragic happening IS a good first day. On the first day, he walked with the bike, while sitting. The next day, he was running with the bike. We again went to an area where there was a slight hill to help him. Within a week, he was gliding! 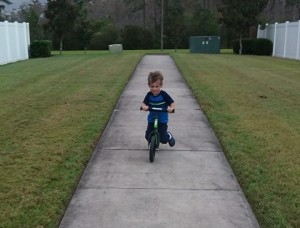 We then simply got much practice on the balance bike. At first I noticed that he only went a short distance. Learning this new skill, like all skills, seems to be taxing at first. So, even though the bike is a technology that allows a person to travel a long way with ease, at first, he could only go a short distance. I gave him little challenges for the bike. For instance, to put his feet on the bike while gliding. He always at least tried the challenge I gave him. I also put together a YouTube playlist of kids riding their balance bikes for him to watch. I did NOT do it with the intention to goad, but to let mirror neurons kick in, such that he could see other kids do it and possibly copy them. It gave him and me ideas of how to do it. One idea was to go to a skate park and practice.

So, for Christmas, we got him a real bike. He did use it Christmas day, but it was very difficult for him to use the pedals on the real bike. We put it away for when he was ready. Then, one day we were at Wal-mart. He saw the bikes and asked to ride one. Well, they had training wheels. So, he got much practice using the pedals of the bikes. Training wheels did serve a purpose for us–they helped him learn to pedal a big bike–but I am glad we got to do it for free, at the store, and did not have them on the bike we bought.

Then, only a few days later, he went and got his “pedal bike” and asked to try it again. So, out we went. He again had trouble keeping his feet on the pedals and getting it started by himself. I remember this day. I was trying to push him on the bike and hold a very clingy 16-month old toddler. I came home and told my husband I qualified as super mom.

How I talked to him in these moments of struggle was so important. I made sure to not say something like “If you keep practicing you will get it!” This is too abstract for a young child. It also highlights their failure: That they in fact have NOT achieved the desired end yet. Instead I just said, “I like how you are practicing!” In his eyes, it was not at all failure that he was not up and riding on a bike. Instead, he was completely awesome because he was out practicing. In fact, that first day, even though he did not pedal and balance, he came home telling his dad, “I did it! I did it!” And he did–just being on the bike, trying, is an accomplishment in itself.

The very next day, we were out again. That morning he told me, “I had a dream about the pedal bike.” And on this day he went out–and did it! It was only a short distance, but he was keeping his feet on the pedals, and I can only assume his past training on the balance bike kicked in–and he was off! He was pedaling and balancing. I threw my hands up in the air in excitement! And from then on, it was almost as if it was no big thing, as if he had always been doing it.

I have noticed many times that when I give my son a demonstration or training, at first he cannot do it, but then he sleeps on it, and the next day, the skill explodes out of him. That happened repeatedly all throughout learning how to ride a bike. The first day never showed noticeable “success.” It was always slightly clumsy and difficult. Patience and support are key. Many times, the very next day, he got the skill. Something about the overnight rest helps.