Teaching colors to toddlers is one of my favorite activities. Teaching colors is by nature reality-oriented. You can only teach any color by pointing to it. It also lends itself so easily to good teaching methods, where adults don’t get overly wordy in explanations.

I found with both children so far that you can teach colors before they turn 2. I refined this timeline with my daughter, my second. I documented when she started to go through “leaps,” where irritable behavior is followed by astonishing bursts in ability. I found at the 20 month leap, she started to get the idea of colors. Then, at the 21 month leap, she demonstrated, towards the end of the leap, that she could accurately identify 5 colors. The end of this leap was around 22 months. So I would recommend starting these activities around 20 months, and getting aggressive about them at 22 months. I also found that my son, my first, knew colors really well by 2 years old (24 months).

To teach colors, shapes, or letters, at this age, I can’t get enough of matching games. Following Montessori principles, whatever material you use should be exactly the same except in color. For colors, Montessori directly advocates having the child match the like-colored objects together first. This precedes the three stages of learning. It draws the student’s attention to what attribute you are teaching. After they have matched them, you identify the color name, e.g., “Blue.” Identification (saying “Blue”) is Stage One of learning.

I had used magnets with my son, but, truth be told, he kept ripping them off of the refrigerator, breaking them, and throwing them. With my daughter, I used anything and everything that was similar in color, but I ended up using Unifix Cubes the most. Here are some examples of what we did at first.

These sorting apples were great. It is true they also change in size or feature, but the most striking thing about them was color. At the earlier age of 20 months, she showed she knew green and yellow pretty well. 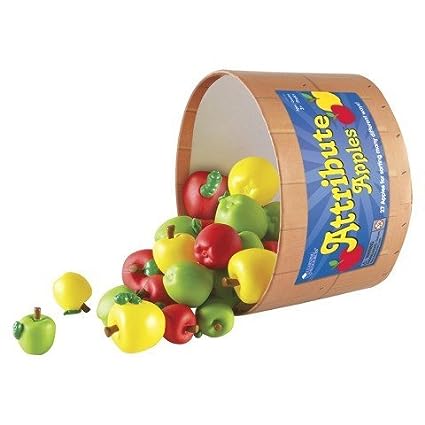 When my daughter put the reds with the reds, the only thing I said was “Red. Red. Red.” Same with green and yellow. This is the first stage of learning. These lessons should be purposely simple. Usually I did the lesson one day and then the NEXT day I might ask her, “Can you get me a red one?” This is the second stage of learning. The second stage is essential to learning. The child needs to USE the information to really learn it–though I find most educators go to Stage Two much too quickly and tend to stay there.

I do think that doing two different lessons to teach the concept is powerful. It really cements an idea and isolates the concept. I try to do this with almost everything I teach. With colors, it just means sorting different types of objects. As many as you have or want to, really!

We sorted golf tees that we happened to have. I was really stunned when, after she did this activity, she went and found other items that matched the colors she had just sorted! Notice the cups in with the bins below. My toddler daughter did that. Like Montessori says: Spontaneous activity in education! 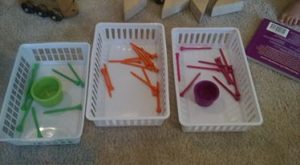 I noticed, around 22 months, that if my daughter was only presented with 3 sharply contrasting colors, she would identify them correctly. But if there were 5 or 6 colors, she would start to confuse them. She especially confused orange and yellow and also green and blue. My son had this exact same issue. I believe it is completely normal.

So I started to present very similar colors. At first, I was going to do only two colors at a time, in rainbow order. So I had wanted to do red and orange. Well after I did this activity, again my daughter wanted to find like-colored objects, and she found a yellow car and wanted to put it in the orange bin. So I upped the lessons to three colors, doing red, orange, and yellow. It seems to be the full context that she needed without overwhelming her.

Moving down the line to orange, yellow, and green: 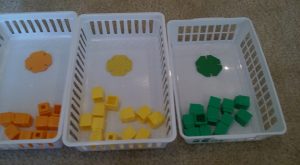 But, by the time I got to orange, yellow, and green, my daughter lost some interest. She connected them together, based on color, as unifix cubes. But she mostly wanted to dump them, which she thought was hilarious. I found out later why: She KNEW colors. She was bored with the activity at this point. I found this out by asking her to point to the colors of a bunch of balloons found in one of her books that had red, orange, yellow, green, and blue. Well, based on some bad lighting, I had thought two of the balloons were actually both blue. I had asked her to point to red, orange, yellow, and blue, and she did, correctly, even with 5 colors before her. Then I said there were two blues. She CORRECTED me that one of them was green. I looked closer. It sure was.

Now if I ask her to point to a color, she points to absolutely everything that is that color. Her dad asked her to point to a green Christmas ornament in one of her books once. She not only pointed to the green ones, she counted that there were 4 of them. My husband welled up with tears and told me, “Our daughter is a genius!”

I find purple is hard to teach, because most toys do not come with a purple option. Blue and purple are a LOT a like. But unifix cubes (which do not have a purple color) are otherwise just great. They also typically come with brown, white, and black. Throughout these activities, my daughter would sometimes simply get the cubes out, on her own, and build rods of like-colored cubes.

I love these matching games for most abstract concepts, such as color, and also shapes and letters. Montessori taught letters with sandpaper letters, closer to 3 or 4 years old. I found at this age doing matching games with letters was powerful. This is my daughter with a letter puzzles. At 22 months, she again shows remarkable understanding of about half of the letters. It is unfortunate that these letters come in different colors. But, I am more comfortable with it, because she DOES know colors. That’s why I do colors before letters. 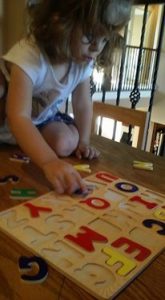