Responsibility. That’s what adults are supposed to teach children, right? Our goal is to socialize them into independent adults? I’m right there with you to raise an independent adult but in this blog post I am going to challenge the idea that children “need to learn responsibility” or as some put it “should not be rescued.”

A friend of mine’s daughter forgot an orange for school. The orange was meant for a class experiment that day. When she went to bring it to school, she was met with a rude secretary who explained the school policy was that parents could not drop off items for their children anymore. This was especially frustrating on top of the lack of communication from the school, full voice mail boxes, etc. This policy was put in place to supposedly teach students responsibility and to stop parents from rescuing their children.

I have been documenting the age-related developmental cycles children go through, and one of my main goals is to rework people’s attitude’s about children’s “misbehavior.” Children are not developmentally ready to take on the full responsibilities of an adult. Further, they go through stages where they become absent-minded. Consider this from What Every Parent Needs From Their Parent about 11 year olds:

As puberty takes center stage, tweens can actually slip backward in some basic skills. Spatial learning and certain kinds of reasoning may decline at this stage, studies show. Parts of the brain responsible for prospective memory, or remembering what you are supposed to do in the future, are still maturing. This may be why a teen may seem clueless if asked to give the teacher a note before school.

Consider this policy at the school. Why did they put in place? The truth is they did it because so many parents kept coming in. It got to be overwhelming for the school staff. It does not have to do with what is healthiest for the students. Why would it become so overwhelming? Because it’s unreasonable to ask teens to remember stuff like this on a consistent basis. When something is this big of a problem, the issue is not the individual laziness of a person (also, this is never  the real issue) but some bigger issue that is yet to be understood. If it’s this big of a problem, a totally new approach is needed. Reduce the number of notes and objects a child must remember. The article linked suggests being like a buddy and leaving visual cue reminders for your children.

It is very common in some parenting books for the authors to promise that they don’t advocate to “referee or rescue” children. They create the idea that there are two parenting styles: one that is too authoritarian (referee) and one that coddles too much (rescues) and they are the happy middle. I’m challenging that. There are some responsibilities that should not be in the child’s lap. When things are going wrong and the child is failing–floundering more like–a new approach is needed. This is especially true for issues that directly affect the well being of the child, such as clothing, money, and food and during developmental stages. My personal experience  is that extending too much freedom to the child in these areas, without proper mentorship often causes the child to fail and they don’t learn a lesson from it; they instead learn to live with failure. Children are not adults. They don’t learn entirely from their experiences; the experiences are absorbed by them, meaning they form their very character. As the subtitle of the article linked says, “they need coaching, support, good examples, and most of all understanding.”

Further, an understanding of childhood development can help immensely with fostering the very independence that people want to foster. The thing about the slip backwards in their basic skills is that soon after there will be a great advancement in their skills. The brain is temporarily “under construction” during these stages. After, not only will they remember the note, they might astound you with what they can do. After this construction phase, you might give them an extra challenging activity that you previously thought impossible for an 11 year old. Maybe they could plan your next camping trip? I don’t know the answer to that yet. This is the type of question I ask in relation to my work which I hope to spur discussion. There is an enormous, untapped potential there, and if you give them an activity in high alignment with their development and interest, they will do with joy and dedication. It won’t be a frustrating fight.  Come see the group Misbehavior is Growth — The Discussion if interested in thinking creatively about this issue.

See my first book in this series, Misbehavior is Growth: An Observant Parent’s Guide to the Toddler Years. 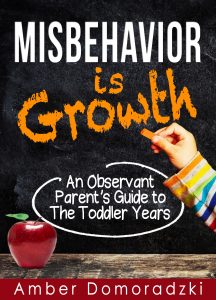