Skip to content
Posted on August 26, 2016 by Amber Posted in Montessori

Like all creative ideas, the one I had for making matching bean bags for my children was rooted in observation. And like all good child activities, it was child-inspired.

We have corn bags at our house, intended to be heated up and used on sore muscles. I watched my 4-year-old take an interest in them once, matching ones that were like patterned. 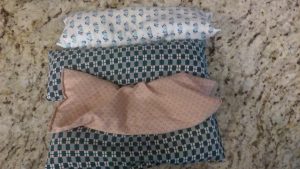 This is similar to a Montessori activity, where the children are given swatches of different fabric to feel and match. However, Montessori herself admits this wasn’t the most popular of activities at her schools. I admit I have tried it in the past and it didn’t go over well (though it may have been age inappropriate.)

But: Bean bags! These are different than just fabric. You do something with them. I personally find bean bags irresistible. I like to hold them and move the beans inside around, kind of like a stress ball. And you can play games with them. They invite you to hold them and to feel them. As noticed by watching my son, the different, matching fabrics also invite an observation of the fabric itself, exactly what I want. So, I got to figuring out how to make very small bean bags, two of each type so they can be spontaneously matched together by children who play with them, out of a variety of fabrics. Cotton, denim, silk–polka dots, stripes, plaid: I couldn’t wait!

I am no sewer!! I took Home Ec in 7th grade. I was told I was smart so I was handed a difficult project. It made no sense to me and the teacher did most of it for me. I came out of it thinking sewing was a massively confusing task. But I managed to sew some bean bags together. It is actually a great beginner project. I followed the directions at this website almost exactly: How to Sew Bean Bags. For a reminder for myself, in case this blog post ever comes down: Iron your fabric, use a rectangle and fold it in half, cut the corners before turning it right side out, use a funnel for the plastic pellets, and someday learn how to hand stitch for a nicer looking bag!

One of my trial bean bags, mid-sewing: 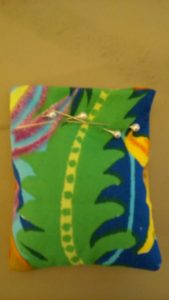 The purpose of this post isn’t really to describe how I made them, but rather the interaction I had with my children while and after making them. A lot of life skills here (sewing); a lot of how to talk to children when taking on a difficult task; and a product at the end for all ages.

I was really happy to show my son some simple sewing basics as I took on my first bean bag. I was also happy that he could see mom learning a new skill, though he may not have realized it was new to me. The simplest of lessons was that I had some fabric, and we were going to use the thread in the sewing machine to sew the pieces together. When I showed him that, then showed him the bean bag, he repeated what I had said verbatim, showing a strong interest in the seams in the bean bag.

At first I tried showing him how to make a pattern, cut it out, sew it inside out, etc. He did take an interest in my explanation of this, and that’s good. Then he tried his hand at cutting a pattern out of a fabric: 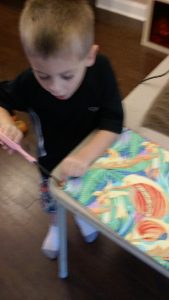 He became frustrated by having to follow a line and left the activity immediately.

Then he found a fabric he liked: a striped, leopard-like print. He told me he wanted to make his own design, by cutting a straight line down the middle, resulting in a large rectangle, to make “a really big bean bag!!”

I was opposed at first. I had wanted to make tiny, matching bean bags. I started to insist that we had a pattern we could use, it had to be placed at a certain spot, and we were going to make two of them.

I really had to do some soul searching as I argued with my 4 year old over what bean bag to make. This is an issue I’ve been dealing with: what does it mean to be “too permissive”? The definition I found, which I love, is when a child is doing something that you don’t like, that you don’t feel comfortable with, that is causing discomfort to you–but you still allow. I found this definition in the book Parent Effectiveness Training, which I am reading now, and has a strong grip on me lately. Being too permissive is not healthy, and the author says it is THE worst thing you can do as a parent. It does no one any good to continue to let the child do something you hate, silently building resentment. But I also recognize that children have growing developmental needs and, in the interest of their actual development not just their whims, perhaps some parental needs have to relent. This is a big, big issue in my mind.

I decided that I had plenty of other fabric to make matching bean bags, and I could always get more. We’re talking material that is less than $10 total. My son wanted to make a bean bag of his own design. That’s fantastic! Let’s do it.

So he cut his line down the middle, a completely jagged line. I decided I could probably work around it and didn’t try to step in and make it be more straight. But then we got to the issue of whether to sew it inside out or right side in. He absolutely refused to fold it such that it was inside out.

I heard myself saying, “But that’s not how it’s done!” I could feel the non-verbal clues I was giving off, that I was disappointed in how he wanted to make this bean bag. To be blunt, I sounded like my mother. Having been reading P.E.T., I have been thinking a lot about how when you try to intervene with what a child is doing, you aren’t just giving them information about how something is done. You are passing judgment on them. You are telling them they are not to be trusted; that they are incapable; that they are unaccepted.

I thought about all that I was saying and doing. The arguing at least had to stop. I thought about the worst thing that could happen if I sewed the bag right side out. Truth be told, I wasn’t entirely sure. I knew however that, ultimately, the bean bag would still be together, just not as pretty. And doing something the right way and then the wrong way is often a powerful lesson, when you can compare the two side by side.

So, I stopped arguing. We made the bean bag as my son wanted. We ran out of pellets for it, so there are two plastic golf balls stuffed down it, in addition to some pellets. My son absolutely loves it. 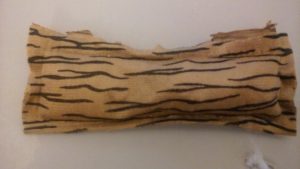 I worry that the initial fight I put up with my son may have ruined his desire for this project. But, there is a red fabric he wants to make another “really big bean bag!” out of. So, we are still on the bean bag train. We are just waiting for some more pellets to come in the mail.

The bean bags are a lot of fun. They are better than balls in the house. A ball, after thrown, bounces around. A bean bag just plops. These are great for any age. It will be a great sensory bin for my unborn son, when he is about 6 months old. I do expect them to be mouthed though. 🙂 My toddler can (and does) practice throwing them. My preschooler and I play catch with them. They are great.