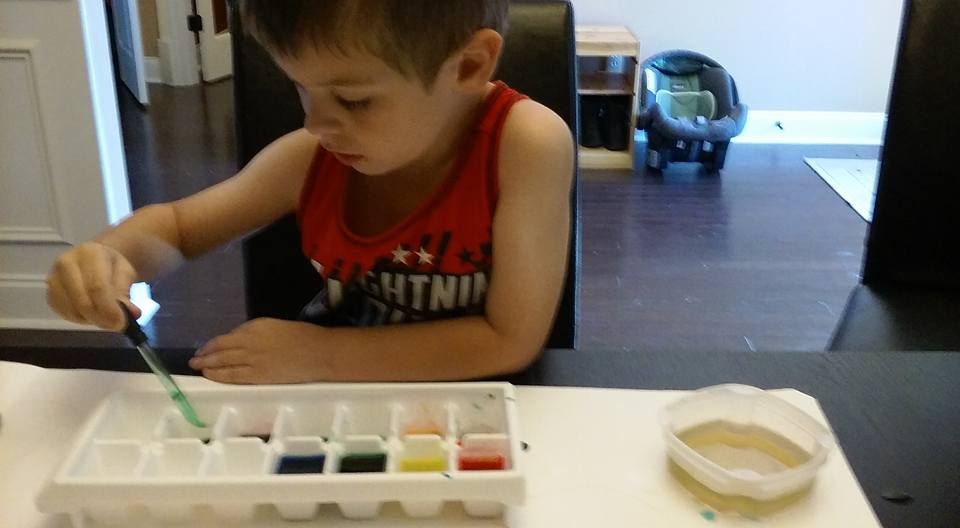 My son, 4, lately, has taken to taking things out of our pantry and doing “experiments!” with them. This includes dumping flour, cocoa powder, and sour cream on a paper plate as an … “experiment!” Or he dumped an entire bottle of refillable foam soap down the sink once.

I’m not one to stifle my son’s creativity, but sometimes I like having the stuff we bought not go down the drain. I have this book Help Your Preschooler Build a Better Brain. It has many scientific experiments to do with preschoolers in it. I like to flatter myself that if I guide my son’s behavior into something constructive, the undesirable behavior might stop; I might tap into a new interest of his; and his brain might grow–and I would be the genius who orchestrated it all. Ha. We’ll see. 🙂 But doing real experiments was super fun and provided a way to teach many very valuable lessons.

The first experiment I did was simple vinegar on top of some baking soda. I don’t do the thing where you turn this into a lesson on volcanoes, because, well … that’s not … how a volcano works. Maybe I am too particular. Plus I didn’t want to get the brown and blue Play Doh out to set up the whole scene. I put the chemicals in a cup in the sink. It was nice and simple.

What I found with doing these guided scientific experiments with my son is that it gave me a rich, fertile ground to give him strong guidance from start to finish. There were many discipline issues I was able to address through them. My son was so over the top excited to do “Experiments!” so I was able to take advantage of it.

The first thing I did was to have my son wash his hands. “We always wash our hands before doing an experiment,” I told him. Whereas he sometimes resists washing his hands, this time he promptly did it. This is one discipline issue that got a wee bit more practice.

When I got the chemicals out, my son was wanting to grab them and use them. This grabbing is another discipline issue. I told him he had to wait while I gave a demonstration. I was reminded how in Montessori, all lessons start with a strong demonstration at first. Then the keys are handed over to the child. I showed him how to pour and measure each item properly.

Then I let him do it. He got more experience with measuring, pouring, and sequence of order. We added food coloring. It was great fun! 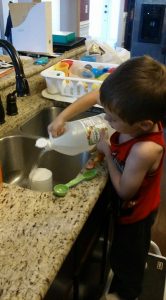 When we were done, I put the empty bottles and boxes in their own separate bag to be thrown away. I told him we saw how they can cause eruptions and they should be thrown away separate from other garbage. I was getting him used to the idea of handling biohazard or other waste.

During this experiment, we were messing around with food coloring and my son wanted to do more food coloring stuff. I had thought of an activity where water and food coloring are put in an ice cube tray and then the child can use an eye dropper to mix colors together in different empty cubes of the ice cube tray. It’s easier to explain with a photo: 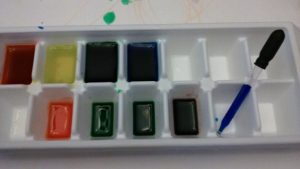 I again showed him a demonstration before letting him do it. I had a bowl of water and showed him how to clean the eye dropper every time we used a new color. The colors were very vibrant and attractive. It was easy to see how, if a person shook the table or didn’t clean the eye dropper, one color would contaminate another color, which was undesirable for our experiment.

He then got experience handling the eye dropper. He also got to see how the colors mixed together. He already knows what colors make what, because we’ve done it with Play Doh. Using it here, he got to see how the results were repeatable. And they are made repeatable because of the discipline we brought to it, by keeping our equipment clean. Personally, I think this is the scientific lesson that the child should receive out of doing scientific experiments–one of the discipline of science. 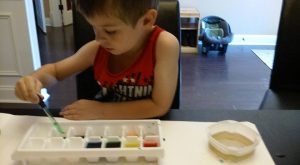 I love this picture above of my son. He is focused and learning something as he does an experiment. The temperament in the air of everyone, including mom, is one of calm. Compare this to the high emotions that can run when a child is grabbing things you don’t want them to grab out of the pantry. Plus they are way more fun than dumping cocoa powder and flour on a plate. 🙂