The Montessori form of education has, as one of its central cores, a sensory education. When it comes to the sense of taste, however, Montessori herself wrote in The Montessori Method, regarding “EDUCATION OF THE SENSES OF TASTE AND SMELL”:

“This phase of sense education is most difficult, and I have not as yet had any satisfactory results to record. I can only say that the exercises ordinarily used in the tests of psychometry do not seem to me to be practical for use with young children.”

Montessori describes how she tried to develop a sense of smell in children by holding up a full bouquet of flowers as compared to another bouquet of different flowers.

I think the sense of taste and smell are fundamentally different than vision, hearing, and sense, and should be treated differently in a sensory education.

In the Montessori method, strongly contrasting things are presented to the child at first. For instance, with color, bright blue and bright red might be presented first, so it is obvious to the child their difference. With taste and smell, I don’t think strong tastes or smells can be presented at first. This sense, and the sense of smell, are too easily offended. If I walked into a room that simply looked disorganized, I wouldn’t want to leave immediately. If a room smelled foul, I would want to leave immediately. Taste especially is strongly linked to survival, and people have an instinctual reaction to draw away from something they don’t like.

In addition, two to five year olds are commonly “picky” about eating. For these reasons, I think a taste education has to start with subtle, not bold, tastes.

It is logical to begin a taste education with the different flavors of fruits and vegetables–fruits especially, given their deliciousness. A child handed a fruit and asked to eat it may or may not like it. (If they’ve been eating it since they could first eat, around 6 months, you may have better luck.) Instead, it needs to be “diluted” (or mixed) with other substances. I find making popsicle out of fruit have been perfect. A popsicle is made of fruit, some type of liquid, and flavoring, whirled together, and frozen, to make a nice treat.

How I made Popsicles:

For the liquid, water can be used. Juice can be used to intensify the flavor, but I worry about sugar. I used milk, because my son likes absolutely anything that has milk in it. (Using milk makes them “creamsicles” I am pretty sure, but, whatever.) I also added only the slightest amount of sugar. I used a ratio of 1 cup fruit: 1/2 cup milk: 1 teaspoon sugar. For every 6 popsicles, I used 3 cups fruit, 1 1/2 cups milk, and 3 teaspoons sugar. Note: I however always made 4 cups fruit, 2 cups milk, and 4 teaspoons sugar, because my son always ate about that much “whip” before I made the popsicles. 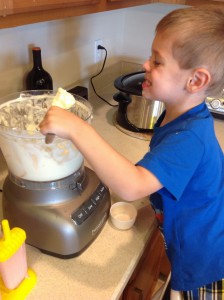 I used a food processor, not a blender, to make them. I learned to put the liquid in first and then spread the frozen fruit around before blending. When I put them in the molds, my husband taught me a trick to pound the molds on the counter, to cause vibration, such that the liquid went to the bottom of the mold, filling in all the gaps, and becoming level on top. It worked well. I had some sharp looking popsicles: 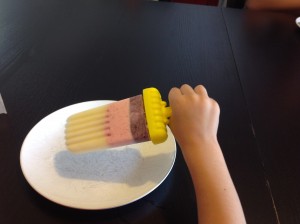 I experimented with many flavors, doing only one flavor at a time. Pretty much every single one I made was a hit, and it included blueberry, strawberry, pineapple, peach, and cherry. 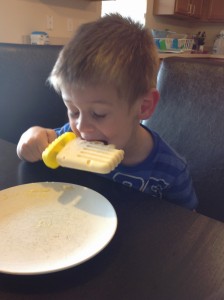 I plan on making some unusual ones, using mint leaves, milk, and chocolate chips to make mint chocolate chip and using coconut flakes to make coconut. I will use a blender, not a food processor, for these. I am always on the lookout for interesting popsicle ideas. If you have some, and they aren’t too sugary, send them my way!

I especially like to make popsicles that have 2 or more flavors. I would make whip of one flavor, put it in the mold, and then make the next flavor, and put it in the mold, such that the flavors were layered. This ways, as my son ate it, he could compare and contrast the flavors. He loved having two or more flavors. Once I introduced this idea, there was no making just one flavor anymore.

This is especially fun, because he helps me make the snack. We do this every Monday or Tuesday. He never forgets that we do this at the beginning of the week. He puts the sugar in and even helps put the whip into molds. But, mostly, did I mention that he just eats the whip? 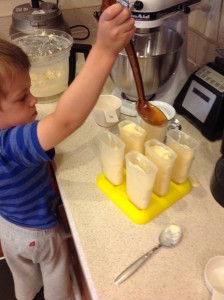 In the above picture, he is using a gigantic spoon. At first I thought, “That isn’t going to work.” Then he surprised me by making it work! Lesson learned, mom.

I love that we have a healthy afternoon snack.  All around a big hit at our house!

To know if the lesson on taste is resonating, I know I need some feedback. The Stage 2 of learning in Montessori is to ask what is essentially a multiple choice question, “Is this one peach or strawberry?” The multiple choice question is an easy question meant to get their mind thinking about what they are looking at. I would ask my son these questions, but they were so easy: the color of the popsicle gave it away. But, there are some things that gave me feedback about this process.

One is that when we went to the grocery store, he would point out blueberries or pineapple to me and say, “That’s what we make popsicles out of!” It made my heart smile that he made that connection. 🙂 <3

What I consider to be the “final” stage of learning in Montessori is when the child starts noticing a particular attribute in reality, on their own. With a taste education, I would say part of this is that they don’t just notice it, but want to experience the taste. I was surprised, and loved, that when we would go out for ice cream (on rare occasion!), my son would try to find the tastes that we made at home. He picks a new flavor every time we go–his idea of picking flavor is to try new ones, not to go back to old favorites. I am stunned that he eats strawberry ice cream–I would have never done that as a child.

It is important to watch language when doing this. When I was given a strawberry, I was told, “She doesn’t like strawberries.” A child interprets this as “She is a strawberry hater”–permanently, as an etched part of their personality. As it turns out, I actually don’t dislike strawberries, I just disliked that strawberry on that day presented in that way. It is important as parents to avoid labels: Telling a child “You can’t catch a ball. You’re butterfingers” or “You wouldn’t say Hi to grandma. You’re a shy little boy,” and on. These are all temporary things; they are all skillsets that can be worked on. Instead of labels, try to always use the magical phrase, “Let’s try again later.”

One thought on “A Taste Education Using Popsicles”