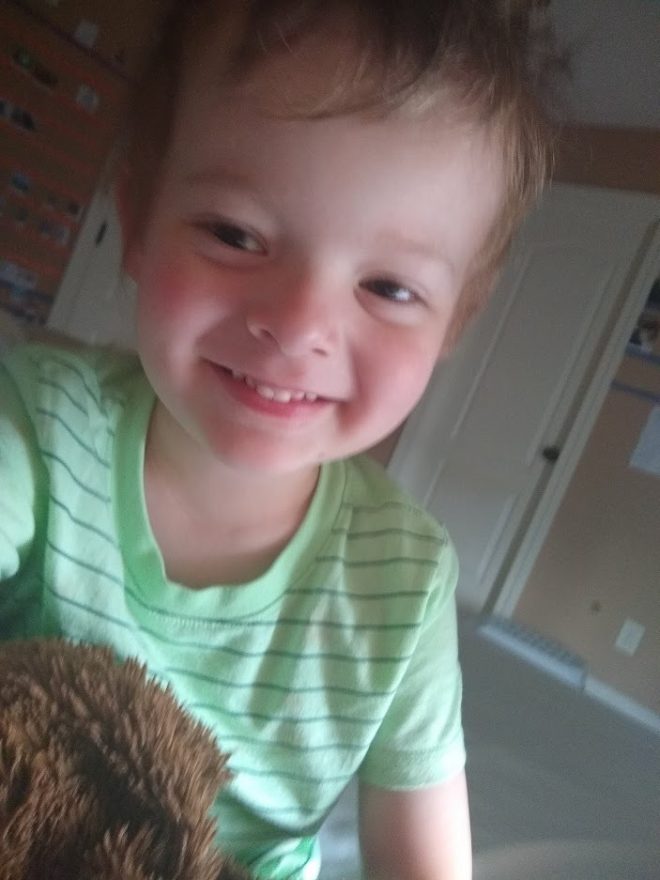 I remain amazed at how predictable child development is. We dealt with an issue where my son, my third, fell to the ground after we couldn’t find the remote. I realized in watching how he reacted: He knew where the remote was. He wasn’t upset we couldn’t find it. He was upset because he realized he had lost it. He was overwhelmed with his first sense of shame. He was just a little bit over 3 years, 6 months, 1 week old.

I was utterly stunned when I went to update my own child development work and I wrote about the age of 3 years, 6 months, 2 weeks old, “Very upset to the point of screaming when they are made aware that they hurt someone.” Holy moly. That sense of overwhelming shame happens at this nearly exact age.

Before this, my son had been noticing more stuff like this. He whispered to his dad a few weeks before, “Daddy, John’s lego.” He had accidentally broke his brother’s lego. He wanted his dad to know, and to fix it–quietly.

But now in Preschool Milestone 8, this feeling of potential shame is in full throttle–and overwhelming. Specifically, it is shame that they DID cause harm. They show guilt and shame before this. But it might have been after getting yelled at. Or they thought they were responsible for something–when they weren’t. In the early 3s, they might assume shame for something, but something they had no control over, such as their brother is simply crying. Now, after several milestones in which they truly start to understand the overall situation, they realize: no, really, I DID do something and I DID hurt someone. Overwhelming, right?

Here is a story I told on my Observant Mom page about how I handled it with my third:

This morning, I couldn’t find our remote. We watch Paw Patrol with my son, 3, in the morning. He came up to me, asking for it, wondering where the remote was. We looked all over. We couldn’t find it. He was suggesting places to find it. Then, when we exhausted all places downstairs, all of a sudden, he fell to the floor, crying, kicking, distraught.

I think some might see this and think he’s just frustrated because we couldn’t find the remote, but I saw something much deeper. I could tell he KNEW where the remote was. He sometimes likes to hide things or move things. He is also at an age where he can learn how to use the very remote. He was just totally upset.

I realized: I think he was dealing with potential shame. It’s as if he knew he caused the remote to be lost, and we couldn’t find it, and HE might be responsible. Woah. That’s a big deal. I don’t know. He’s a cute kid! I scooped him up and just held him. This boy is the cuddliest of all of my children. He loves to lean into mommy. So I took the moment and relished in it. We sat on the couch, with him totally wrapped in mom’s comfort. Thankfully, dad was home. I said, “You know, he likes to hide it in cabinets sometimes. Maybe it’s there?” Dad looked. It wasn’t there. My son watched, cautiously. I gently asked questions, “Do you know where it is?” “Maybe you took it upstairs?” “Are you feeling sad?” “Do you like being with mommy?”

Finally he popped up, “The airplane can find the remote!” The night before, he and his older brother were throwing airplanes off of our cat walk. Ah. In the moment of excitement, he went up there, with the remote, and left it up there. Or maybe he brought it up before bed. But either way “the airplane” could find it. He does this. He taps into “super powers” to find mommy when he can’t find me or “the airplane” can find something–something, some tool, other than him, that he leverages. My husband went upstairs–and indeed found the remote.

It just really felt like it could have been a situation where one got in his face, “WHERE IS THE REMOTE!? YOU HID IT, I KNOW IT! SAY WHERE IT IS!” But being able to wrap him in total comfort and talk him through it, he opened up. It really felt like he had one of his very first , “oh… crap” moments in his entire life.

One thought on “3 Years, 6 Months: When They Become Overwhelmed with Shame”